Underwater archaeological exploration has led to various discoveries, including artifacts from the famous Myeongnyang Battle during the Joseon Dynasty (1392-1910).[JoongAng Ilbo]

Digging up precious treasures underwater may be about to get easier.

Among the conditions, what stands out the most in the MOU is a pledge to further develop a robot specifically for underwater archaeological exploration. 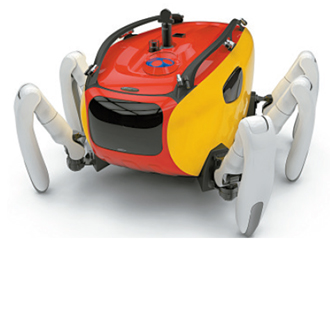 Crabster is expected to be developed further. Provided by the Cultural Heritage Administration

“And starting next year, the two will conduct joint study on further advancing the robot’s technologies.”

The robot doesn’t look all that fancy, frankly. Currently, Crabster, as it is nicknamed, is known to be equipped with a high-tech sensor and camera, in addition to various capabilities for discovering data such as the depth and temperature of water.

Although it remains unclear how effective Crabster’s performance will be, it is pretty clear that Korea is highly invested in underwater archaeology - it claims to lead that field in Asia, in fact.

There have been two big breaks that garnered much attention from the public.

The first was in 2012 when the government conducted archaeological exploration in waters off Jindo Island, South Jeolla, the site of the Battle of Myeongnyang Strait in 1597 - one of the most famous naval encounters in the Joseon Dynasty (1392-1910).

On that day, Admiral Yi Sun-sin’s fleet of 13 ships defeated a force of 133 Japanese vessels. This led to the discovery of about 120 relics, including guns, bullets and pale green-blue celadon works from the Goryeo Dynasty.

Another discovery was in 2008 when Korea conducted a survey on an 800-year-old shipwreck near Taean’s Mado Island, South Chungcheong, after a tip from Korea’s haenyeo, or female divers. Numerous items such as wooden invoices, ceramics, and golden and wooden artifacts were found.

In an indication of Korea’s commitment in the field, the government introduced a brand new ship -the Nurian - dedicated solely to underwater archaeology in 2012.