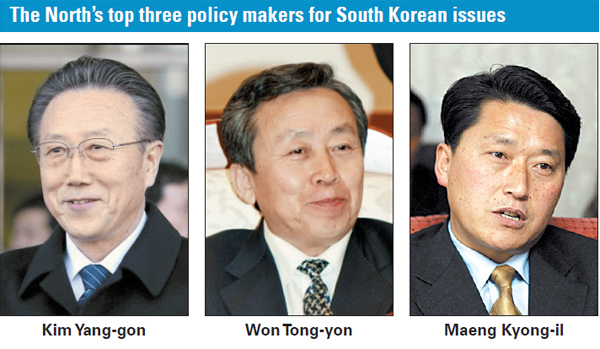 Young North Korean leader Kim Jong-un, who was inspecting progress on one of his signature projects, suddenly suggested to the aides around him that they all ski down the slope on Taehwa Peak near Wonsan. It was just a few days before the resort’s opening day.

Fresh on the aides’ minds was the brutal execution of Kim’s powerful uncle Jang Song-thaek, once considered the second most powerful man in the regime, which had occurred just a few days earlier. Jang had gotten on the bad side of his nephew and lost his life for it.

Kim reportedly is an excellent skier thanks to his days studying abroad in Switzerland as a teenager. His top aides, however, are mostly in their 60s and 70s and some had never donned a pair of skis until then.

But they were forced to follow Kim’s lead down the slope.

As a result, Kim could not appear in official events for the next several months. That led to speculation in Seoul that the man who oversees inter-Korean policy was seriously ill - or had been purged because of his connections with Jang.

“We even studied whether Pyongyang’s South Korea line would change,” a key official on North Korea policy in Seoul said. “But finally we were able to obtain intelligence that it was just a leg facture and that there was no problem with the power structure.”

On Aug. 17, Kim showed up at the Kaesong Industrial Complex to present a wreath from Kim Jong-un to a South Korean delegation to commemorate the fifth anniversary of the death of Kim Dae-jung, South Korea’s former president. It was his first time he engaged with the South since his skiing accident and it proved that he remained the North Korean leader’s proxy as far as South Korea policy was concerned.

Won Tong-yon, 67, deputy chief of the United Front Department, who headed the North Korean delegation for high-level talks in Panmunjom in February, and Maeng Kyong-il, 51, head of North Korea’s Asia-Pacific Peace Committee - the other bigwigs in regards to policy about South Korea - are all of lower rank than Kim.

But Kim’s South Korea policy seems to be uncertain, according to analysts here.

As he handed over the wreath at Kaesong earlier this month, Kim even remarked to Rep. Park Jie-won, a senior lawmaker with the main opposition New Politics Alliance for Democracy: “Things continue to happen. There is a lot of noise from the South, but it is not a welcoming sound.”

Analysts in Seoul said that the South Korea policy led by Kim Yang-gon no longer displays the meticulous strategies of past Pyongyang inter-Korean policy veterans.

In fact, the North appears to be shooting itself in the foot with some of its moves, such as the unilateral withdrawal of workers from the inter-Korean Kaesong Industrial Complex in April 2013. The industrial park stopped operations, but after a while Pyongyang had no choice but to negotiate its reopening with South Korea.

A similar scenario occurred over the 2014 Incheon Asian Games scheduled for next month. Pyongyang flip-flopped on whether it was sending a delegation of athletes and cheerleaders several times.

Pyongyang also unnecessarily angered the South Korean public by calling the victims of the tragic Sewol ferry sinking in April “fish food.” Most of the fatalities, which numbered more than 300, had been 11th-grade high school students.

On Aug. 14, Pyongyang fired five short-range rockets - the day Pope Francis arrived in South Korea. The North’s official Korean Central News Agency called the launches a “blessing for the North, South and all the people abroad.”

Analysts in Seoul have called for a transformation in South Korea policy from Pyongyang. The Lee Myung-bak and Park Geun-hye governments may otherwise be looked upon as a “lost 10 years” in terms of North and South Korean relations.