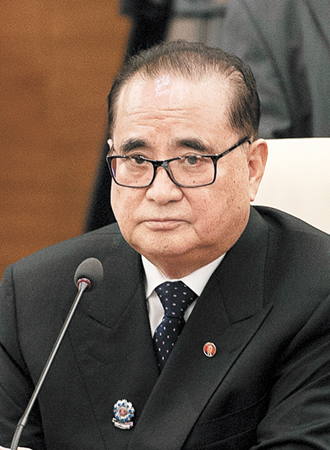 “North Korean Foreign Minister Ri Su-yong will go to New York in the latter half of September and is known to have applied to make a speech at the [UN] General Assembly,” a diplomatic source said. “If things go as planned, this will mark the first time a North Korean foreign minister has gone to New York in 15 years.”

North Korean foreign ministers have attended the UN General Assembly only twice since it joined the United Nations – once in 1992 by Kim Yong-nam attended, and again in 1999 by Paek Nam-sun, who is now deceased.

South Korean Foreign Minister Yun Byung-se is planning to visit New York to attend the launch of the 69th session of the UN General Assembly, at which numerous world leaders will be present.

Kim Kwan-jin, the chief of South Korea’s National Security Office (NSO), is also expected to head to Washington later this month, which – paired with Ri’s anticipated visit to the United States – is hoped will lead to some momentum in inter-Korean relations.

As the Blue House’s top security adviser, Kim is expected to meet with National Security Adviser Susan Rice, his U.S. counterpart, according to government officials, to bolster cooperation between the two sides on the denuclearization of North Korea. His visit may come as early as the upcoming Chuseok holidays next week, government sources added.

“It may appear like North Korea and the U.S. are becoming closer, excluding South Korea, however, because consultations between the South and the U.S. have been strong, there is nothing to be concerned about,” a government source here said.

But sending Blue House National Security Adviser Kim to Washington is seen as a move to strengthen cooperation with the United States as well as to prevent a situation in which Seoul may be excluded, experts say.

“Kim’s schedule for a U.S. visit is currently in the works,” the government official added. “If he ends up visiting the U.S., he will meet with Susan Rice and other officials to boost bilateral cooperation.”

Blue House spokesman Min Kyung-wook said yesterday that while Kim’s visit was being planned, if it was scheduled, “it will become a part of regular consultations since Kim was inaugurated as chief of the NSO to foster cooperation with the U.S. National Security Council.”
On Thursday, Ulchi Freedom Guardian, the joint military exercises between South Korea and the United States that the North protests as a “provocation of war,” ended ahead of schedule.

Because joint military drills between Seoul and Washington have traditionally resulted in increased saber-rattling from Pyongyang, there is hope that with the conclusion of the drills, progress in North-South relations, specifically the resumption of family reunions, may be advanced.

In August, the South Korean government offered to hold high-level talks with North Korea to discuss reunions for families separated during the 1950-53 Korean War, among other concerns. North Korea did not take up the offer.

However, later that month on Aug. 17, Kim Yang-gon, North Korea’s director of the United Front Department, offered a conciliatory wreath to a delegation from Seoul at the Kaesong Industrial Complex to commemorate the fifth anniversary of the death of former South Korean President Kim Dae-jung, who had particularly amicable ties with Pyongyang.

Washington has three citizens, including Korean-American tour operator Kenneth Bae, currently detained in Pyongyang, and Ri’s visit may serve as an opportunity to discuss their release.

Since he became foreign minister in April, Ri has traveled across Southeast Asia to promote North Korean diplomacy. Last month, he made headway in multilateral diplomacy efforts during an Asean security summit in Myanmar.