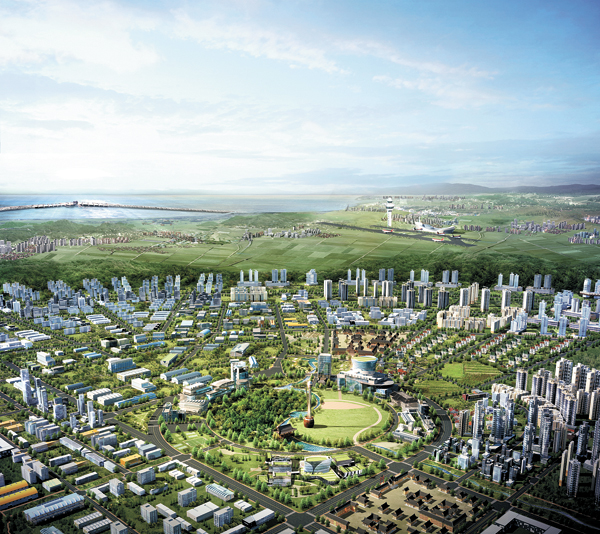 A computer image of Foodpolis, which the government plans to open by 2020. Provided by the Agriculture Ministry

In June, six members from China’s National People’s Congress met with government officials and researchers in charge of food management at the European Union in Lisbon to learn about regulations that could help improve China’s food safety.

The delegation looked into how the government could verify and certify its food distribution course, implement an insurance system for food safety and create special regulations for health-related food products.

The nine-day meeting was part of a trade-boosting project agreed upon by China and the EU in 2010. China created its food safety law in 2009.

“Food safety is one of the five subjects of the trade vitalization project that the EU and China have agreed upon,” said an official from the Korean Ministry of Agriculture, Food and Rural Affairs. “That’s how much the Chinese’s interest in food safety has grown.” 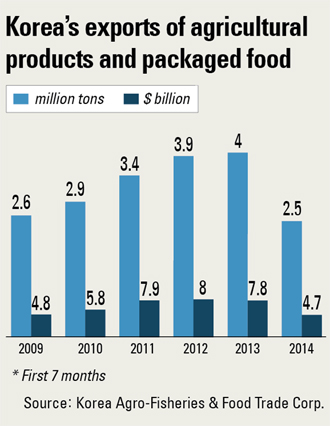 As Chinese concerns over food safety have grown, the Korean government is taking the opportunity to expand its agricultural and packaged food exports to its neighbor, particularly since many Chinese consider Korean products to have high safety standards.

And foreign companies are also eager to join in by opening branches in Korea.

CHC specializes in beef jerky, Tai Hua makes soy sauce and Chye Choon produces processed rice noodles. Other companies that have signed on to join the cluster include Italy’s Forno d’Asolo, which manufactures frozen bread and pizza, as well as the Netherlands’ Nizo, one of the top three food research groups in Europe.

Foodpolis is expected to be completed in 2020 and will cover an area of 2.3 million square meters (568 acres). A total of 48 foreign food companies and research labs have signed an agreement with the government to set up offices, as have more than 50 Korean food manufacturers.

The companies want to churn out products with the label “made in Korea,” which is highly trusted by Chinese consumers, and they will also be able to cut costs because shipping products from Korea is less costly than shipping from Europe.

It takes 30 to 40 days for a company to export products to China from Europe. During that time, the product becomes less fresh, even if it’s frozen or processed. But the products manufactured in Iksan and shipped to China from the port in Gunsan, North Jeolla, will reach Shanghai in one day.

It is 50 kilometers from Foodpolis to the port and only two kilometers from the cluster to the Iksan Interchange expressway. Since food companies have to use refrigerators to keep their products fresh, distance is important.

“We believe if the amount of cargo is sufficient, fresh food with a short expiration date could be delivered to the respective export market using fast boats,” said Kim Chang-gyun, an official in charge of port and logistic planning at the Ministry of Oceans and Fisheries.

The interest from foreign food companies is also grabbing the attention of major Korean companies.

CJ CheilJedang said it has decided to set up shop at the food cluster complex and has put China as its second-biggest priority after Korea.

At its Iksan plant, the company said it plans to focus mostly on the production of precooked rice and sauces.

Another Korean food company, Sempio, which exports goods to 76 countries including China, has agreed to set up a research center and a production plant for fermented food at Foodpolis.

Dongwon F&B, famous for its canned tuna, and the poultry company Harim are also planning to join. By 2020, 51 Korean companies will be operating in Iksan.

Food-related companies are also hopping on the bandwagon, including Lipmen, a company that specializes in moisture absorbers that keep food fresh.

The company announced its plan early last month to invest 4 billion won ($3.9 million) in the complex.

Interest in Foodpolis is also increasing due to the free trade agreement (FTA) that Korea and China began negotiating in July.

“There is no need to build a plant in China where labor cost continues to grow every year if we could benefit from the lowered custom tax from the FTA [between the two countries] on top of enjoying reduced costs of delivery as well as the positive brand image of ‘made in Korea,’” a CJ CheilJedang official said.

The government believes the FTA is also encouraging Chinese companies to become part of Iksan Foodpolis.

Among them is Qingdao Foods, which decided to join the project in October.

The company, which specializes in confectionaries and chocolate, will re-export its goods back to China and will benefit from lower costs under the FTA.

The Korean government believes Foodpolis will also benefit Korean consumers since products made by foreign companies in Iksan will be distributed locally, giving consumers more choices.

The government expects the cluster will also force companies to compete for higher quality and better prices.

“We expect a ripple effect from the cluster, as it will not only provide job opportunities but also contribute to raising the income of local farms and other food-related suppliers once exports of products from the cluster increases and thus production will be raised,” said Kim Won-il, who heads the Foodpolis management team at the Agriculture Ministry.

The government hopes to replicate the success of other food clusters in advanced economies including Food Valley in the Netherlands, which is 90 kilometers from Amsterdam, Napa Valley in California and the Oresund cluster, which is jointly managed by Denmark and Sweden.

Food Valley in the Netherlands has 1,440 companies including the Heineken brewery and Heinz, along with 91 research labs.

Food exported from the companies in the Dutch cluster accounts for 31 percent, or $32.5 billion, of the Netherlands’ overall annual exports of roughly $104 billion.

This is more than four times the size of Korea’s agriculture and food exports last year, which was $7.8 billion.

Italy’s Emilia-Romagna cluster is known for having no major food conglomerates, and consists of small companies with specialties such as wine, pasta, olive oil, ham, sausages, vinegar and cheese - yet it exports $27 billion worth of products per year.

The companies at the Emilia-Romagna cluster lower production cost by sharing the distribution system.

The Korean government’s goal is to make Foodpolis the world’s leading food cluster by exporting $6.4 trillion worth of products by 2020.

“In a flight distance of two hours, we have access to 60 major cities with a population of more than one million,” said Kim of the Agriculture Ministry. “We have an excellent investment environment. We could further cement our success because we have FTA agreements with 44 countries.”