Taking a leap toward gold

Taking a leap toward gold 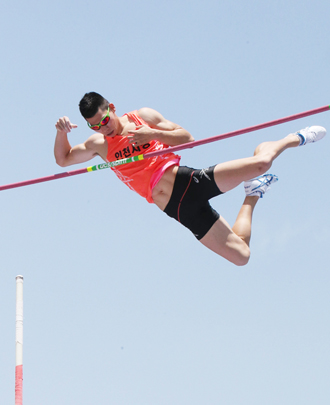 Jin Min-seob jumps at the Busan International Pole Vault Meeting in May where he won gold. By Song Bong-geun

A pole-vaulter who jumps over a bar nearly 19 feet high using a 16-foot pole weighing 5.5 pounds looks like a human bird as he soars over the bar.

In the 2014 Incheon Asian Games that kicks off Sept. 19, 22-year-old Korean bird Jin Min-seob is aiming to win the country’s first pole-vaulting gold in the Asian Games.

“He is one of our best prospects not only for the Asian Games, but the time after that,” said Kim Bok-ju, technical committee chief of the Korea Athletics Federation and coach of the track and field team that will compete in Incheon.

At the International Association of Athletics Federations World Youth Championships in Athletics in 2009, Jin won gold in the men’s pole vault by clearing a bar set at 5.15 meters (16.8 feet) high. In the Taiwan Open Athletics Championships, he set the new Korean record by completing 5.64 meters, then broke that record by jumping 1 centimeter higher at the Busan International Pole Vault Meeting in May.

In elementary school, Jin was a sprinter. His talent was recognized during a field day relay at his school, Sasang Elementary, and after that he started his career in athletics and became a pole-vaulter when he was in seventh grade.

At first, it wasn’t an easy sport for Jin to pick up, as he was only 149 centimeters tall and was also afraid of jumping over the bar.

“I once blacked out for a few seconds when I hit my head on the ground after I missed my pole on a jump,” Jin recalled. “After that, I was so scared every time I faced a bar. I had to stop practicing for two months.”

Fortunately, he grew 26 centimeters more over the next year, which helped him overcome his fears. He suffered a series of injuries to his wrist, back and hamstrings, but he never gave up.

“No one knows how exciting it is in the moment when I jump over a bar,” Jin said. “I soon fell in love with this sport and I’m not afraid of attempting high jumps anymore. And since this isn’t a popular sport like baseball, I didn’t have any pressure on my performance. One day, I just became a leader in this sport.”

After seeing Jin’s skill, the athletics association hired a Russian coach in 2010 who once trained legendary pole-vaulter Sergei Bubka, who set 35 world records. “The coach led me in the right direction when I fell into a slump in 2011 and 2012,” Jin said.

Jin is predicted to compete for gold against China and Japan. Xue Changrui of China won the 2013 Asian Athletics Championship by clearing 5.60 meters and covered 5.80 meters earlier this year. Japan’s Daichi Sawano has successfully reached 5.70 meters. Jin, who won bronze in the 2013 Asian Athletics Championship, is still behind them, but Korea is expecting the best from him.

“The gold medal record in the 2010 Guangzhou Asian Games was only 5.50 meters,” said Jung Bum-cheol, a national team coach. “I think his physical condition on game day will decide the color of [his medal], and since his techniques are getting better every day, we are aiming to complete 5.70 meters [the Korean record] in the first attempt.”