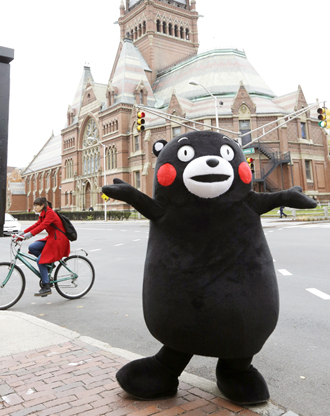 Kumamon, from Japan, dances on the street outside Harvard University in Massachusetts. [AP/NEWSIS]

TOKYO - Hello Kitty, who many learned last week is a girl and not a cat, may be the queen of Japan’s cute characters, but she’s hardly the only one.

There are thousands, and they are ubiquitous: Long-time favorite Doraemon (who really is a cat) has a daily quiz in a national newspaper. Little monster Pikachu hosted a theme cafe in Tokyo this summer. Stress-relieving Rilakkuma (‘’relaxed bear’’) dangles from teenage girls’ school bags.

Characters are not just for kids in Japan, but a part of business and social life. Some see Japan’s cute-craze, known as “kawaii,’’ as a sign of immaturity, but others say it’s rooted in a harmony-centered way of life that goes back to ancient animist traditions.

Japanese used to worship many gods and portrayed ghosts as comical characters. In what is seen as the origin of Japanese manga, or comics, a set of 12th-century scroll paintings humorously portray frogs, rabbits and other animals in human activities, from sumo wrestling to temple worshipping.

Here are a few that have risen above the crowd:

The cat that’s not

Created 40 years ago, Hello Kitty is made up of just a few simple strokes: two dots for eyes and a tiny circle for a nose, and no mouth. In contrast to expressive American characters such as Mickey Mouse and Garfield, Hello Kitty doesn’t show emotions, and the simplicity has attracted fans from children to street fashion devotees. An article in the Los Angeles Times last week created an Internet firestorm when it explained that the character is not a cat; many insisted she must be. Despite her cat-like ears and whiskers, she is a “cheerful girl with a gentle heart,’’ says the official website of her theme park, Sanrio Puroland. Born Kitty White in the suburbs of London, she weighs the same as three apples, enjoys baking cookies and dreams about becoming a poet or pianist.

Goofy black bear Kumamon is perhaps the most successful of the mushrooming new characters that seek to promote a locality in Japan. Its name means a native of Kumamoto, a prefecture in southern Japan, and the character was introduced on March 12, 2010, the day Japan’s high-speed bullet train entered full service in the south. The prefecture doesn’t charge a licensing fee to use Kumamon’s simple image, and experts say that has been a key to success. As the bear’s popularity grew, more and more companies wanted to cash in. Today it appears not only on Kumamoto souvenirs, but also on innumerable products including instant cup noodles, snacks and cosmetics.

Doraemon, a blue robotic cat from the 22nd century, started as a manga (comic) character in 1969. It has a four-dimensional pocket in its stomach with a seemingly endless supply of items to help its friends. Among them are a ``time machine’’ and ``anywhere door’’ that allows them to travel wherever and to any time period they wish. Doraemon is popular in many parts of the world, including Asia and Latin America, but the television cartoon series didn’t debut in the U.S. until this year. Adaptations for an American audience included simplifying the names of two boy characters from Nobita Nobi to ``Noby,’’ and Gian to ``Big G,’’ and replacing Japanese yen with U.S. dollars.

The “relaxing bear’’ is usually seen lounging on a yellow bean bag, sometimes nibbling on snacks, demonstrating an ultimate stress-free lifestyle. The roommate of a 25-year-old female office worker, Rilakkuma’s gentle words such as ``sleep and reset’’ and ``let’s worry when that happens’’ have been compiled in a series of popular books, serving as remedies for stressed-out Japan. Created by San-X, a Tokyo-based character-oriented stationary and gift company, Rilakkuma has raked in more than 10 billion yen ($100 million) from stationary, clothing and book sales since its 2003 debut.

A chubby yellow rodent, Pikachu is the most popular of more than 400 monsters in the Nintendo video game series Pokemon. The series started in 1996 as a pair of game titles for hand-held player Game Boy and has evolved into playing cards, animation, video games and movies. Pikachu makes frequent public appearances in Japan, especially during summer break. Besides the theme cafe in Tokyo’s fashionable Roppongi Hills shopping complex, hundreds of Pikachus swarmed into Yokohama in mid-August in a “Pikachu outbreak’’ event.

The next big thing?

Japan’s latest sensation, Youkai Watch started as a video game, and went big in January with the launch of a cartoon on TV. The story centers on teenage protagonists and their encounters with more than 250 characters, including the popular twin-tail cat Jibanyan and floating spirit Whisper. Children collect special coins to call up their favorite specters on arcade game machines. Many of the coins have sold out, and children and their parents waited for hours in long lines outside stores when new coins and related toys went on sale in early August.