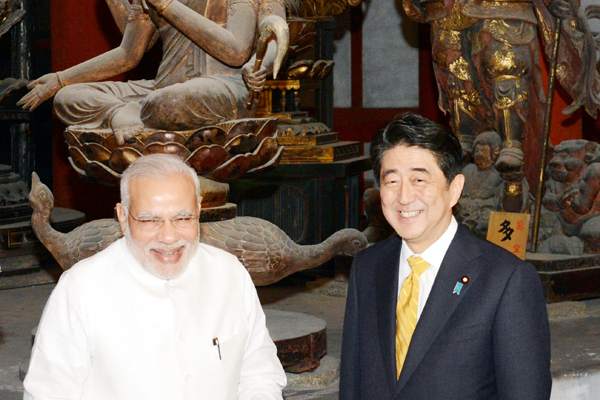 Narendra Modi, India’s new prime minister, visited Japan twice during his long decade of ostracism by the West. He is one of only three people that Shinzo Abe follows on Twitter. Commentators have hailed Modi as “India’s Abe” because he seems as determined as the Japanese prime minister to boost national self-esteem through economic growth.

Japanese direct investment in India is rising; it may even help realize Modi’s grand, Japan-inspired vision of “smart cities” and bullet trains across India. But Modi has deeper reasons for bringing to his first major bilateral visit the intense ardor of a pilgrim approaching an ancient shrine.

Since the 19th century, Hindu nationalists have venerated Japan as the paradigmatic Asian society that preserves its traditional virtues while also developing industrial and military strength and inculcating patriotism among its citizens. Swami Vivekananda, an iconic Hindu thinker of the 19th century (also the only writer Modi seems to have extensively read) claimed after a visit that “if all our rich and educated men once go and see Japan, their eyes will be opened.”

Evidently, the Japanese had “taken everything from the Europeans, but they remain Japanese all the same” while in India, “the terrible mania of becoming Westernized has seized upon us like a plague.”

Modi ably channels Vivekananda in his praise for the Japanese traits of self-sacrificing nationalism. And he has not evolved a “Look East” policy just because he was denied visas by the United Kingdom and United States after communal riots on his watch as chief minister of the state of Gujarat claimed more than 1,000 lives. Modi seems sincere in his invocation of what Asia’s three outspoken leaders of the 1980s - Singapore’s Lee Kuan Yew, Malaysia’s Mahathir Mohamad and Japan’s Shintaro Ishihara - called “Asian values.”

Lee typically argued that the only antidote to “the disruptive individualism of Western liberalism” was renewed stress on “individual subordination to the community.” This coincides perfectly with the values cherished by the Rashtriya Swayamsevak Sangh (Modi’s ideological guide, and the parent outfit of Hindu nationalism). Not surprisingly, Modi’s recent Independence Day speech, which was widely hailed as “forward-looking and modern” was also, as the columnist Shekhar Gupta pointed out, “pure RSS” in its emphasis on “family values, morality, cleanliness, discipline and patriotism.”

But can Modi’s old-fashioned reverence for all things Japanese, from the tea ceremony to nuclear plants, produce the right blueprint for India’s future? After all, Japan today offers less instruction in world-conquering industrial growth and innovation than in the admirable art of “bending adversity” - the title of a superb new book on Japan by David Pilling that Modi might find more up-to-date than Vivekananda’s musings.

The Japanese state’s striking early example of fostering internationally competitive local industries was closely followed by countries such as South Korea and Taiwan. Leaders of Malaysia and Indonesia eagerly sought Japanese investment in their economies, primarily to diversify their industrial bases.

The most avid of these Asian Japanophiles was Mahathir, the long-lasting prime minister of Malaysia and unabashed exponent of majoritarian nationalism. His own “Look East” policy was grounded in economic relations with Japan as well as racial and civilizational assertions of difference, and included an explicit anti-Western posture.

For a while, everything seemed to be going well. Then, in the 1990s the limits of Japanese developmentalism were exposed by the new age of globalization. So much of the Japanese economic miracle had been contingent on U.S. willingness during the Cold War to open its own markets to Japanese manufacturers while turning a blind eye to Japan’s blatantly protectionist trade policies and restrictions on capital movement.

Japan’s comparative advantage couldn’t last, and it didn’t. The Asian financial crisis then went on to expose, among other things, the dangerous overreliance on foreign investment of countries like Malaysia. We haven’t heard much about Asian values since then; those who look East now seek out China rather than Japan. Canceling talks with Pakistan, or rejecting the World Trade Organization deal reached at Bali, Modi could be projecting the India that can say no: He is more India’s Mahathir than India’s Abe. But it is hard not to suspect anachronism and naivete in Modi’s plan to model India’s economy on Japan’s postwar achievements of technical innovation and labor-intensive manufacturing.

The export-oriented economies of Japan and its Asian clients achieved their highest growth when most Chinese were still wearing drab Mao suits. The spirit of innovation long ago shifted from Sony to Apple; and Abenomics, the engine of a fresh national ascent to glory and power, is now running on empty.

Even Mahathir now thinks Japan made too many irrevocable mistakes, and has switched his affections to the Korea of Samsung and Hyundai. Arriving in Japan, Modi will no doubt find some good deals for India. But he will also find the beloved old shrine of Hindu nationalists deserted, the faithful long gone in search of other gods.