Apartments to be rebuilt sooner

Apartments to be rebuilt sooner 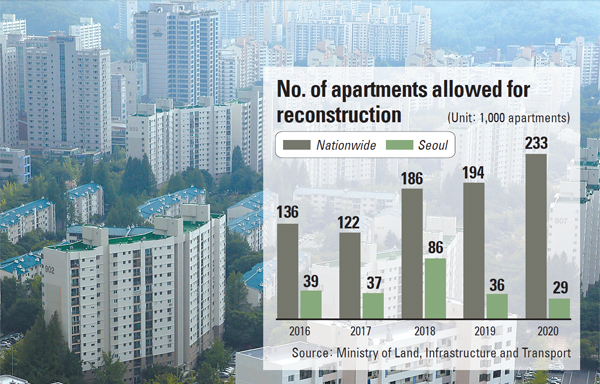 With the government’s decision to lower the age limit on apartments that can be rebuilt, complexes that were built in 1987 including some in Mok-dong, western Seoul, pictured above, are subject for reconstruction in 2017 instead of in 2019. By Kang Jung-hyun

The government yesterday decided to lower the time limit for apartment reconstruction as part of its efforts to stimulate the housing market.

The measure follows the easing of the loan-to-value (LTV) and debt-to-income (DTI) ratios, which took effect last month, and will also help the moribund property market out of its long recession.

The Ministry of Land, Infrastructure and Transport announced that it would cut the minimum age of housing units that are subject to reconstruction by up to 10 years after saying in February it will lift 30 percent of the 2,400 regulations on the property market by 2017.

The current law on reconstruction allows apartment buildings to be rebuilt if they are more than 20 years old.

However, most municipal and provincial governments require an apartment building to be used for a minimum of 40 years before it can be rebuilt, but the situation varies depending on the area in which the building is located and the reconstruction is subject to the government’s consent.

The ministry said it will seek to cut the minimum requirement to 30 years and ease other requirements for reconstruction. For instance, aging apartments will be approved for reconstruction before 30 years if living conditions in them have become unbearably inconvenient, such as an extreme lack of parking space or excessive noise that could stir conflict among neighbors.

If the revised law passes through the National Assembly, roughly 370,000 apartments built in Seoul in 1987 are expected to be eligible for reconstruction in 2017. Previously, the buildings could not have approved for redevelopment until 2019 and would have needed the government’s consent. Apartments built in 1998 can be reconstructed in 2018, four years earlier than before.

Since many apartments in Seoul were built in the late 1980s, especially in the southern and western areas­­­­ - Gangnam District and Yangcheon District - there may be changes in housing prices, if the reconstruction market heats up.

The apartment building age limit has been a major hurdle to growth in the reconstruction market along with hefty levies on building owners who reconstruct.

If the price of a person’s apartment would go up by more than 30 million won ($28,151) after redevelopment, the owner was forced to pay up to 50 percent of the increase. It was decided in February that the regulation would be lifted, but it still needs approval from the National Assembly.

Along with eased financial regulations, the relaxed rebuilding rule is expected to improve the market significantly as the number of apartments allowed to be rebuilt will climb remarkably, attracting potential buyers.

“The ministry maintains the stance that excessive regulations that were imposed to contain speculation in the past should be removed,” said a ministry official. “The latest measures are aimed at providing high-quality housing units in cities, mainly led by private developers.”

A regulation requiring 17 to 20 percent of the total housing units in an apartment complex to be used for renters will also be eased to a maximum of 15 percent.

The Land Ministry also said it will scrap the special law on land development promotion enacted in 1980 to address oversupply problems caused by the creation of new towns such as Bundang, Ilsan, Dongtan and Wirye.

In the past, when the country simply did not have enough homes, it was necessary to develop large residential areas in and around urban areas, but the shortage has now turned into oversupply.

As of June, the number of new, unsold housing units stood at 50,257 nationwide. More than 30,000 new homes were empty in Seoul alone.

Instead of creating new towns, the government will let private construction companies lead smaller development projects of their choice.

To do so, the government will sell land owned by the state-run Korean Land & Housing Corporation, which is enough to build about 1.2 million housing units, to private developers at their request.