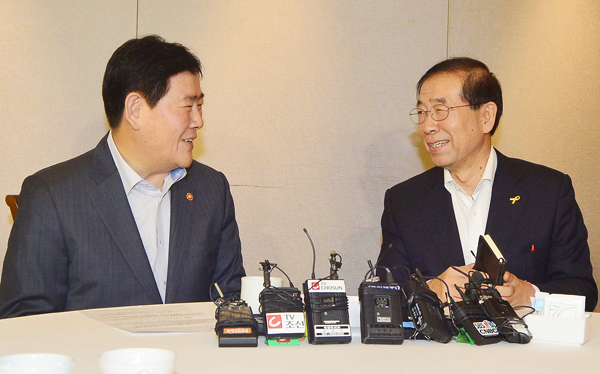 Choi Kyung-hwan, left, deputy prime minister for economy and finance minister, met with Seoul City Mayor Park Won-soon yesterday at the Press Center in Gwanghwamun, central Seoul. One of the items on the agenda was developing areas along the Han River for tourism.[NEWSIS]

Choi Kyung-hwan, deputy prime minister for economy and finance minister, met yesterday with Seoul City Mayor Park Won-soon to call for increasing cooperation and communication between the central and city governments in reviving the economy.

The meeting between the deputy prime minister and Seoul’s mayor was the first since Kwon O-kyu and then-Mayor Oh Se-hoon huddled in 2006.

“There should be no partition between the central and local governments,” said Choi in a meeting with the mayor held at the Press Center in Gwanghwamun, central Seoul. “The central government needs the cooperation of local governments that are working in the field in terms of increasing investment and jobs, and removing barriers to consumption and investment.”

“There is no ruling or opposition party in achieving the goals of restoring the economy and stabilizing people’s livelihoods,” said Park.

According to the Ministry of Strategy and Finance, the ministry and the Seoul city government decided to form a task force, led by the first vice minister and vice mayor, to establish a comprehensive plan to develop Han River areas into tourism sites.

Last month when the ministry announced measures to boost the service sector, it emphasized cooperation with the city government.

To support a tourism industry that has contracted slightly in the wake of the Sewol ferry sinking in April, the government decided to improve infrastructure nationwide, including increasing access to the Han River, building shopping and cultural facilities in riverside parks and establishing a second cable car on Mount Namsan.

It is the first time in 30 years that the government has decided to utilize the iconic river to boost tourism.

The Finance Ministry found only 10 percent of foreign tourists visit the river for sightseeing because it is not sufficiently developed.

While Choi requested city government support for the development plan, Park asked for financial help from the ministry to make “a more secure Seoul City,” citing his plan to invest in measures to enhance subway system safety.

“Seoul’s subway system was designed 30 to 40 years ago, and it is not resistant to earthquakes, which requires a huge budget to fix problems,” Park said.

The two discussed declining tax revenue and increasing spending on welfare, and agreed on the need for solutions.