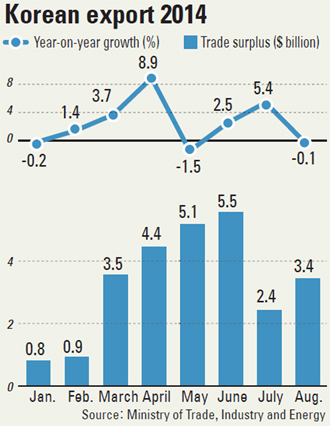 According to the Ministry of Trade, Industry and Energy yesterday, August’s exports retreated 0.1 percent to $46.3 billion, compared to an increase of 7.6 percent in the same month last year. This was largely because automobile exports shrank by nearly 17 percent year-on-year.

However, the export-import balance registered a surplus for the 31st consecutive month, thanks to other traditionally strong exports.

Exports of steel products jumped 9.5 percent over the same month last year and mobile device exports were up 8.7 percent, while exports of vessels increased by 7.5 percent.

“The 0.1 percent retreat is a loss of only about $40 million, so I would say that August wasn’t too bad since 11 stronghold exports other than cars and auto parts showed an average of 3 percent growth,” said Kwon Pyung-oh, deputy minister for international trade and investment, yesterday. “Overall, Korea showed fairly good export growth.”

Automobiles and auto parts make up 9 percent and 5 percent of Korea’s total exports, respectively. Reduced auto production at Hyundai Motor and Kia Motors resulted in losses of about $1.65 billion in August exports, the ministry said.

Auto workers this year took three more days off for summer vacation compared to last year, resulting in export damages worth about $900 million. Workers at Hyundai Motor and Kia Motors took five days off early last month, but last year they took three days off at the end of July and two days at the beginning of August to cushion the production shortage.

Union workers at the two auto giants also went on partial strikes this month, which reduced the value of auto exports by about $450 million. The other $300 million loss came from one less August working day compared to the same period last year.

Although the auto industry dragged down the nation’s exports, the Industry Ministry said it expects the trend to be short-lived.

Regarding questions about the possibility of Korea’s exports becoming sluggish like the domestic economy, Kwon said that “the ministry doesn’t see this trend lingering.”