It’s a widespread assumption that more and more young consumers enjoy trawling through products on their computer screens, while middle-aged consumers remain committed to brick-and-mortar shops.

Not according to a big data study by the JoongAng Ilbo and eBay Korea. 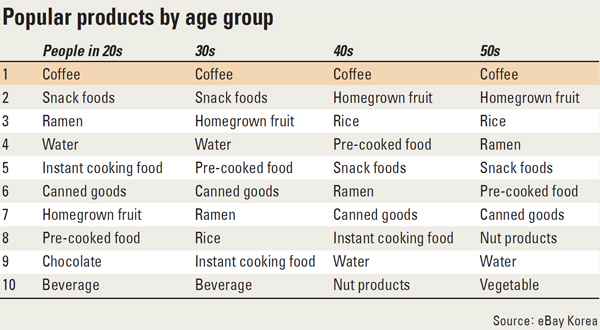 The most popular items among female buyers in their 40s were coffee products, followed by T-shirts and fruit. Coffee also ranked No. 1 among women in their 50s, followed by fruit and rice.

Coffee was the most popular across the age group, but fruit was the top choice of consumers who ordered via their mobile phones.

Men in their 40s and 50s frequently purchase fishing equipment, lights and cables, the study said.

The shift indicates older consumers were attracted by the convenience of online shopping.

A 45-year-old woman, identified by her family name Kwon, is one of the legion of middle-aged people making purchases through the Internet.

She used to do her shopping for grocery items and other necessities on weekends at retail chains. But since a law that requires large supermarkets to close two Sundays a month was enacted, her trips sometimes were in vain. And by buying online, she doesn’t need to persuade her husband to come with her to carry the bags.

Experts say the shift in consumption patterns among women in their 40s and 50s carries weight.

“They are the ones who are at the center of buying decisions,” said Lee Dong-il, a business professor at Sejong University. “So their switch to online shopping malls means a lot to retailers. Large supermarkets have invested a lot of resources in their online malls to increase their appeal to middle-aged consumers.”

As online shopping gains traction, the use of mobile devices with apps that circumvent online malls also is on the rise. The percentage of those who order via their smartphones increased to 30 percent in June from 3 percent in 2012.