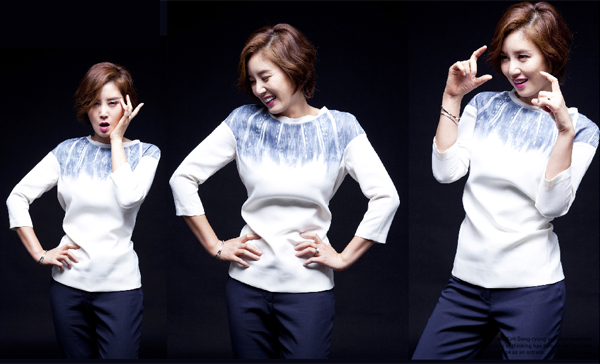 Kim Sung-ryung says her pessimistic way of thinking has helped her to widen her range as an actress. By Jeon Ho-sung

During the past few years, actress Kim Sung-ryung has been actively appearing on both the big and small screens after a six-year break from the entertainment industry, enjoying a second heyday after she made her debut as Miss Korea in 1988.

By playing successful and charismatic career women in “The Chasers,” “Yawang” and “The Heirs,” dramas that earned immense popularity nationwide, the 49-year-old actress soon rose to prominence as a role model for middle-aged women in Korea with her flawless skin, fashionable wardrobe and fitness.

After successfully finishing the drama series, Kim subsequently chose to star in “The Fatal Encounter” and “The Target” - two of this year’s most highly anticipated movies.

When “The Target” was screened at the Cannes International Film Festival, Kim even enjoyed a stroll on the red carpet at one of the most prestigious movie events in the world.

But she didn’t stop there. The actress recently took on another challenge - acting on stage.

In “Miss France,” which staged its finale in August, Kim pulled off three different roles in the same production. The show was based on the French comedy “Jamais 2 Sans 3,” which premiered in January in Paris.

Kim’s whimsical performance had a vital role in making the play a hit. The show was extended for a month due to audience demand and sold 20,000 tickets during its three-month run.

On Aug. 21 a reporter from the JoongAng Sunday, an affiliate of the Korea JoongAng Daily, met the veteran actress to talk about the motivations that have driven her so far.

Q. What made you decide to take on a role in a theatrical production?

A. The reason I decided to take to the stage was because of fear. It seemed like I would never overcome my fear about acting on stage, which is why I attempted a breakthrough once and for all. When I accepted the offer and started practicing for “Miss France,” I heard that Lee Soon-jae, Na Moon-hee and Shin Gu were practicing for “Gold Pond” on the upper floor of the same theater. That made my heart swell for some reason. I mean, look at the passion they have at that age. The fact that they had gathered to practice for a play meant something and it really helped me a lot with my motivation.

How much effort did you put into the play?

I always went to the practice room two to three hours earlier than the other actors to get a head start. There was no way I was going to do as well as the professional stage actors otherwise. I was always memorizing lines, even when I was getting my makeup done or going to bed.

Because you took up a pretty challenging role - playing three different characters on stage - there were times when you made mistakes. But strangely, the audience’s reaction to this was positive. Why do you think this was the case?

Since my lines were just so hilarious, I couldn’t even hold back my laughter at some points. But when I laughed on stage, the audience were thrilled. I think it’s because they’re used to me playing serious roles. But seeing that image being torn down must have been funny for them. I think it helped me to become more approachable as an actress to them. 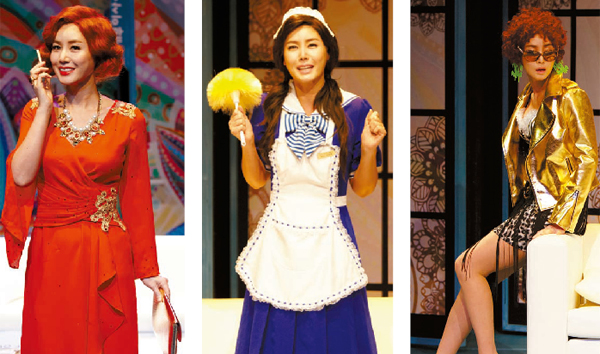 After appearing on TV dramas and in films in the past few years, Kim took on three roles in the French comedy-based play “Miss France,” which held its last performance in August. [JoongAng Sunday]

Why did you decide to predominantly focus on the play for the past five months despite many other requests from drama or film production companies?

Mostly because of Jo Jae-hyun, a representative of the Soo Hyun Jae Company and Theater [the production company behind “Miss France”]. He emphasized that it was my responsibility as a middle-aged actress.

“You have to do this well, and by the time you do an encore on stage, you should have made a lot of opportunities for actresses your age to stand on stage,” he said.

That struck me. As a matter of fact, stage actress Lee Ji-ha was double cast for my role, but she has 20 years’ experience. She is not at a level where she should be double cast, but this is the sad reality for actresses in my age range.

When did you start becoming so motivated?

I never had any desire to become successful in terms of my career when I was young, but before I knew it I was nominated for Miss Korea. I didn’t even like the attention and the multiple requests coming from production companies. I even turned down an offer from an apparel company I was modeling for that wanted to renew my contract. I just wanted to be a good wife and a wise mother before I turned 30.

Do you ever regret turning down so many offers from production companies back then?

Of course. But it is not regret that comes from wanting to be more popular and famous now. I just feel sorry that I missed so many opportunities I could have learned from.

When was the turning point that made you so ambitious?

About 10 years ago? My two children are in elementary and middle school now. I wanted to be the kind of mother that my children could be proud of. Raising children and doing housework is valuable, of course, but it wasn’t something where I could stand out. From then on I started to give more serious thought to acting and transferred my university major [to the department of theater at Kyunghee University] and enrolled in a master’s course as well [at the Hankuk University of Foreign Language’s business school].

Is there a discrepancy between your ideals and reality?

Yes, of course there are times when I felt desperate when thinking to myself, “Is this the limit for me as an actress?” But at some point, after all the obsessing and exhaustion, I found myself putting my anxieties away.

I believed that nothing comes without effort, so after I made up my mind to do things right I scheduled my day into 30-minute sections. I did two to three productions at the same time and also received lessons for everything from sports to vocalization and singing.

I’m not a person who was naturally talented at acting, so I needed to try harder. It’s the same with my university transfer and master’s degree. Anyone can start these things, but not everybody can finish them. In the process of finishing things step by step, I gained confidence, which I think led a lot of people to admire me.

You said you don’t have an innate talent for acting. Have you ever felt frustrated about it?

I’m so good at blaming myself. My sister always told me to stop it. But what’s funny is that this negative way of thinking is what has brought me so far. I always think about [the skills] I don’t have, and in the process of trying to get them, I was able to find what I was good at.

What are you good at?

For example, people love it when I make mistakes. I wasn’t aware of that before. But I realized that if people can accept your mistakes on stage, that means the audience feels a sense of closeness with you and embraces your flaws. That is one charm of Kim Sung-ryung that cannot be imitated easily.

Why do you persistently appear in relatively small roles in films?

It’s not about the size of the role but what you do with it. If I think that if the role is meaningful, I do it. I plan to appear in “Chronicle of a Blood Merchant,” which is being directed by Ha Jung-woo, and only have two or three scenes in it.

You’re an icon of middle-aged women. Do you ever have any fears about getting old?

As an actress I don’t like seeing wrinkles on my face, but now I try to get used to it. On one hand, I feel kind of lucky that looking beautiful and stunning is part of an actress’s duty. Since I get paid for my job, I should keep trying to maintain my looks.