Depression a key theme for 2 Pacino films at Venice

Depression a key theme for 2 Pacino films at Venice 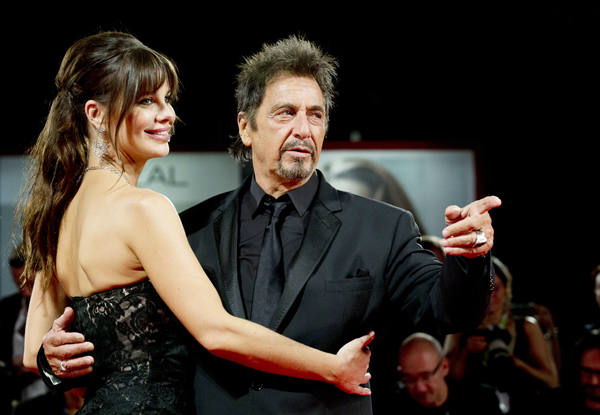 Al Pacino and Lucila Sola arrive for the screening of the movie “Manglehorn” at the 71st edition of the Venice Film Festival in Venice on Saturday. [AP/NEWSIS]

VENICE - Al Pacino fended off suggestions on Saturday that because he plays depressed characters in two movies shown at the Venice Film Festival he must have a special affinity for such roles.

The “Godfather” star, who is 74, also said that while he did not consider himself to be a Hollywood actor, he appreciated some of the big-budget films coming out of there.

“I just saw the ‘Guardians of the Galaxy,’ a Marvel thing, it was amazing,” he said at news conferences after his two films were shown.In Barry Levinson’s “The Humbling,” based on a Philip Roth novel, Pacino plays an ageing Shakespearean actor who has lost his ability to act.

In director David Gordon Green’s “Manglehorn” he is a Texas locksmith who has never gotten over the love of his life, whom he abandoned, and locked himself away from normal human contact.

Since the characters he plays are antisocial and prickly, Pacino was peppered with questions about whether he draws on personal experience to play people who suffer from depression.

“I don’t see how I could not be depressed some of the time, but I don’t know about it,” he said.

“How does it go? You say ‘I’m depressed’ but life is sort of all over us. I mean, things make you sad ... basically you’d like to be a bit happier sometime but depressed seems so ominous and it’s really in all of us,” Pacino said.

Asked if he thought films in general were more depressing now than they were in the 1970s when he played Michael Corleone, the crime boss in “The Godfather” movies, Pacino said:

“I don’t know that films are more depressing now, I don’t know, but I think that in my earlier films I have to say that in ‘Godfather Two’ I would imagine that Michael Corleone was depressed.”

Pacino also said he’d never been a Hollywood actor in the traditional sense, but that did not mean he was critical of it.

“Hollywood is really what it always was, I’m not an expert, I never went there ... my association with it was not unfriendly it just wasn’t really clear and it still isn’t,” he said.

He said a new generation had taken over from what was often immigrant stock from Europe that had founded Hollywood and now different kinds of people ran studios.

“It’s not about being better or worse, it’s just different,” he said. “And they do some great stuff, great films.”

“Manglehorn” is competing for the festival’s Golden Lion trophy, to be awarded next week, while “The Humbling” was shown out of competition.

In an Internet review, The Hollywood Reporter trade publication said “Manglehorn” suffered from a “ham-fisted script, which painstakingly spells out every metaphor, whether it’s spoken or visual.”

“3 Coeurs” (Three Hearts), French director Benoit Jacquot’s film about a love triangle starring Charlotte Gainsbourg and Chiara Mastroianni as sisters who unwittingly fall in love with the same man, a tax auditor played by Benoit Poelvoorde, was also screened as a competition entry.

Mehmet Basutcu, a film critic for the Turkish newspaper Cumhuriyet, said the film was disappointing and relied too much on “hazard” bringing people together.

“For love stories, there are too many good films about that,” he said.