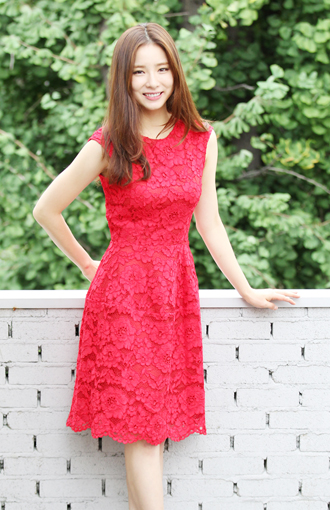 After playing a string of serious and introverted characters in recent dramas such as “Fashion King” (SBS) and “When a Man Falls in Love” (MBC), actress Shin Se-kyung is taking on a bolder role in “Tazza 2,” which will hit local theaters tomorrow.

The “Tazza” sequel has garnered much attention, mostly due to a nude scene where the characters gamble in a card game in their underwear, as well as appearances by K-pop star T.O.P., of the boy group Big Bang, and Lee Honey, a 2006 Miss Korea winner.

Shin told Ilgan Sports, an affiliate of the JoongAng Daily, in a recent interview that she fell in love with her character, Heo Mi-na.

Q. Did you choose this character because she is quite different from roles you have played before?

A. I never really consider it a priority to shape a certain image [for myself] when I choose work. I choose roles because they are good roles in good works, but [some of the ones I have picked in the past] happened to be relatively more somber roles in more serious and heavy works. I just decided I should do [“Tazza 2”] because the script and my character were so fun.

Why was your character so appealing?

These days, it’s hard to encounter a woman who is active, bold and confident rather than passive. In terms of her personality, she’s just perfect.

Is this your way to vicariously experience such a personality?

I’m envious, and that’s why I was attracted to her in the first place.

The movie is getting a lot of buzz even before its release because of some provocative scenes. What are your thoughts on nudity in the film?

If you think of it one way, it could seem like a big deal, but in a different way it’s really nothing. It’s not something incidental; it really means something [for the entire story].

Weren’t you worried about being compared to Lee Honey, who is also in the partially nude scene?

It was so much fun because the overall atmosphere while filming was good. There was no competitive feelings between us. Lee was really cool - cooler than people have said she is. I think I was lucky to work with her.

Did you do anything special to get ready for the revealing scenes?

I worked out a lot so that my body would look good. I normally eat breakfast because I can’t function otherwise. I skipped [some] meals and heard my stomach growling, which was quite a fun experience. Because the scenes were really important and had a certain meaning, I tried to do well although I felt awkward in the beginning.

How was working with Choi Seung-hyun [T.O.P. from Big Bang]?

It was fun. He makes people around him happy. He also wanted to talk about the overall work and characters a lot, which I appreciated.