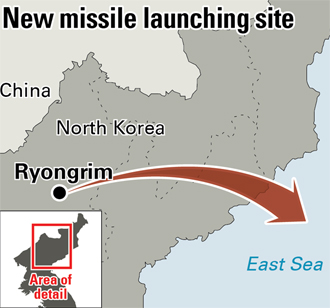 North Korea yesterday fired a missile from a border region with China, the latest in a string of launches this year, in a move that is considered likely strategic as the reclusive country pursues engagement with the United States.

According to South Korea’s Joint Chiefs of Staff, the North fired a short-range missile from the northwest border area near Ryongrim County, in Chagang Province, around 10:30 a.m. yesterday.

The North reportedly fired the missile without declaring a no-sail zone for the East Sea, the military authority said.

The military said the missile flew about 220 kilometers (136 miles) and then fell into waters between the city of Kimchaek and Hwadae County, North Hamgyong Province. It was the first time the North fired a missile from that area, the military said.

The military authority said it was analyzing the specific type of missile fired.

The latest launch site was about 60 kilometers away from the North’s border with China, its most important ally. It is the closest to China the North has ever fired a missile.

“It is the first time the North fired a missile from Chagang Province, an inland area,” a South Korean government official said. “It appeared that the North was trying to demonstrate its military capability that it can fire any missile anytime from anywhere, while trying to study China’s response.”

While the North’s missile tests have almost became mundane due to their recurring frequency, the most recent launch is indicative of a possible shift by the regime in its geopolitical focus.

It took place as Pyongyang is making moves to engage with the United States amid deteriorating relations with China.

Since North Korea’s third nuclear test in February 2013, ties between Pyongyang and Beijing have rapidly declined, with China tightening restrictions on the reclusive state as part of international sanctions.

But since relations between China and North Korea have turned downward, Pyongyang has made new moves recently to improve relations with the United States. Foreign Ministry Ri Su-yong, one of the closest associates of North Korean leader Kim Jong-un, will visit New York later this month to attend the United Nations General Assembly.

Expectations are high that a high-level meeting between North Korea and the United States will take place.