Wild-card winger geared up for Games

Wild-card winger geared up for Games 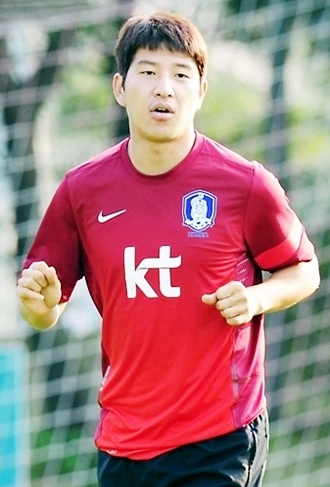 “I want to open up a new chapter in my football career through the 2014 Incheon Asian Games,” said FSV Mainz 05 defender Park Joo-ho, a member of the Korean national U-23 football team led by Coach Lee Kwang-jong.

Chosen as one of three wild cards, the 27-year-old aims to help the team win a gold medal in the Asian Games for the first time since the 1986 Seoul event.

Since the Asian Games are not recognized by FIFA, clubs are not required to send their players to the event, which made it impossible for Coach Lee to add the country’s best winger, Son Heung-min of Bayer Leverkusen, and midfielder Lee Myung-joo, of Al Ain, to his lineup. Both of their teams declined requests from the Korea Football Association to let them play at Incheon.

But Park said he had told FSV Mainz 05 that he wanted to play in the Asian Games since he began negotiating to join the team during the 2013 summer transfer market.

Asia’s biggest sporting event will be a huge part of his career, not only because he wants to help secure his country a gold medal but because winning gold comes with a huge benefit - exemption from his two-year military duty, which would allow him to continue his career in the German Bundesliga.

Failing to win gold means that he must come back to the country to serve in the military at the end of the year. And it means that the defender may never play in a European league again, since he would be 31 after his military service.

Park, born in 1987, could have played in the 2010 Guangzhou Asian Games when he was 23, the perfect age because the team is made up of players under 23 besides the three older wild-card players.

At the time, everyone thought Park, who captained the national team in the 2007 U-20 Canada World Cup, would also be selected for the Guangzhou event. But Hong Myung-bo, who coached the U-23 team in 2010, made surprising choices, developing his squad around players born in 1989 who played for him in the 2009 U-20 Egypt World Cup. Hong said that he wanted the young players to get experience on a bigger stage in preparation for the 2010 London Olympics.

And his strategy worked. The young players who won a bronze medal in Guangzhou later won bronze in the London Olympics.

“At the time I erased the words ‘Asian Games’ from my head,” Park recalled. “I never knew that I was going to play in this [Incheon] Asian Games.”

Park said he is putting his best effort into preparing for the event. He said he often asks legendary wing-back Lee Young-pyo for advice. Lee was a member of the 2002 Busan Asian Games football team, at which Korea won bronze, and he now works as a commentator for KBS.

“He told me that I would feel the biggest pressure ever in my entire career at the Asian Games since it is a home event,” Park said. “He told me that the pressure is reasonable and I should be able to overcome it. Since I’m the oldest boy on the team, I want to lead the younger boys well so we can win the tournament.

“I want the nation to give its best support just like it always has. I can’t wait for the event to start,” he added.