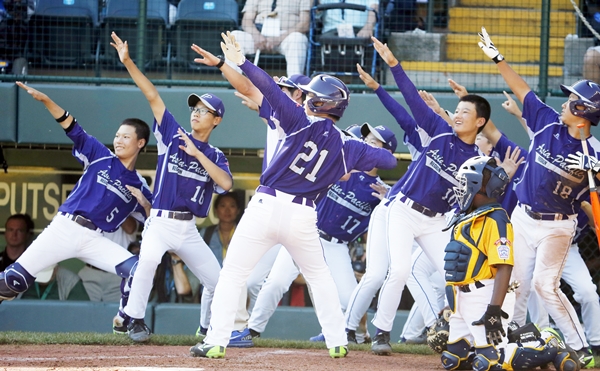 Nearly four months ago, the horrific sinking of the Sewol ferry and the deaths of as many as 250 high school students plunged South Korea into the depths of despair. On Aug. 24, 13 boys from Seoul gave the country a much-needed lift from the other side of the world.

They beat the U.S. champion, Jackie Robinson West of Chicago, 8-4, at a sold out Howard J. Lamade Stadium in South Williamsport, Pennsylvania. The game was broadcast live on ESPN.

There is nothing not to like about this team.

Not only had South Korea gone 29 years without a title, no team from the country had even qualified for the tournament over that span. In punching its ticket to the 2014 Little League World Series, this year’s squad outscored its six opponents in the Asia-Pacific region 74-2 (Taiwan being the only team to score in a game it lost, 9-2).

To reach the final, the South Korean team won four straight games, including back-to-back victories against arch-rival Japan. After managing to prevail, 4-2, in a game where Japanese pitchers combined for 14 strikeouts over six innings, the next meeting was no contest. South Korea jumped on Japan for seven runs in the second inning and cruised to a 12-3 win that left little doubt as to the team’s talent, determination and destiny.

“For a long time, we have been educated that when we play Japan, it will be a big rivalry,” said Hwang Jae-young, last Sunday’s starting pitcher.

Yet after the semifinal on Saturday, the New York Times reported that South Korean and Japanese players exchanged T-shirts, and some of the Japanese wore theirs to the championship game the next day.

In mountainous South Korea and its densely populated capital of Seoul, there is scant space for baseball fields. According to the Korea JoongAng Daily, there are seven officially designated Little League Baseball fields in the entire country, just one of them in Seoul. Three of them have no lights, and none have showers or dressing rooms.

Finally, the scale of participation in Little League Baseball in South Korea is dwarfed by that of other countries. Even though South Korea has gone from 23 teams in 2006 to 158 teams today, there are 745 teams in Japan and more than 20,000 in the United States.

After the championship game, the Seoul players put a Korean flag in a cup filled with dirt and placed it on the pitcher’s mound. Then the team did a victory lap around the field.

“I’m very happy,” beamed Sin Dong-wan, who had a home run. “I want to go to the Blue House so we can meet President Park Geun-hye.”

The president, no doubt, would be glad to see them. It has been a rough summer, with one depressing development after another.

As the Chuseok holiday approaches, the tragedy of April 16 has confronted us daily. For nearly 50 days, there was the heart-rending hunger strike of Kim Young-oh, who lost his 16-year-old daughter on the Sewol. Then there is the baffling and ongoing inability of our political leadership to agree on even the makeup of an independent panel to oversee an investigation on the sinking and the government’s response. Even the recent visit by Pope Francis seemed to provide only temporary respite.

The success of our Little Leaguers could not have come at a better time. Memories of the Sewol will never go away, and rightly so. But it’s time for the country to move on.

On the field in Williamsport, 13 Korean boys reminded a whole nation that good things can happen, and the pain of the past four and a half months began to give way to the promise of tomorrow.

* The author is the business news editor of the Korea JoongAng Daily.