New jobs shot down by ministries

New jobs shot down by ministries

The Private-Public Council for Creative Economy recently came up with an idea to create “tour buddies,” or personal tour guides. The group said that tour buddies would be helpful for the increasing number of foreign tourists who are visiting Korea on their own, rather than joining a tourist group.

About 12.17 million tourists visited Korea last year, according to the Korea Tourism Organization and the Ministry of Culture, Sports and Tourism. About 28 percent visited as part of a tour group and 66.2 percent came independently, up from 64.4 percent in 2012.

A Japanese tourist who visited a cosmetics store in Myeong-dong yesterday to get actress Son Ye-jin’s autograph said she thought personalized tours were a good idea.

“I wish [there were options] for a group of five or six tourists to visit theaters to see their favorite actor’s movie preview events,” she said.

The council came up with its idea while brainstorming ways to create new jobs, which it hopes will also kick-start Korea’s tourism industry. But the proposal was rejected by the Culture Ministry.

“If businesses without an office or capital [are allowed], it’s expected that small-scale businesspeople will flood the sector,” the ministry said.

It added that, with such small-scale businesses, “it’s hard to compensate foreigners for damages if something happens.”

The Ministry of Land, Infrastructure and Transport said that small-scale, personalized tours were a bad idea because they pose a threat to traffic safety. “There could be safety issues because there aren’t obligatory vehicle inspections or education under existing laws,” said one official.

However, Lee Sung-tae, a senior researcher at the Korea Culture and Tourism Institute, said that small tours could work in Korea. “Like the United States or Canada, where one-person tourism businesses are active, [Korea should] also grow its market by diversifying tourist plans,” he said.

Another potential new job that was opposed by the government is chiropractors. Chiropractic is a form of therapy that doesn’t involve medicine. 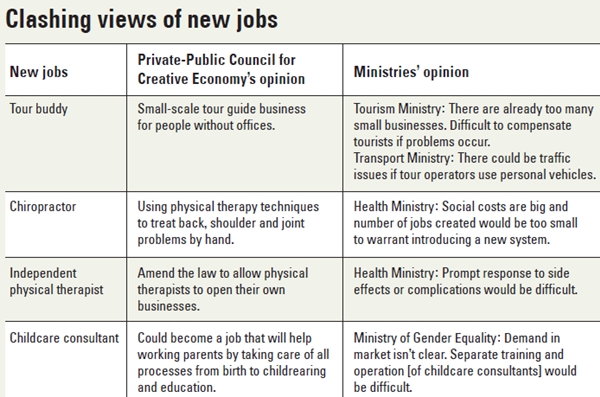 “It’s long been used in the United States for rehabilitation treatment for sports-related injuries or after traffic accidents,” said an official from the Korea Trade-Investment Promotion Agency.

The council sought advice from the Ministry of Health and Welfare in an attempt to list chiropractor as a new job, only to be rejected. The ministry reasoned that it was impractical to create a new certificate, considering the small number of jobs that would be created and the cost of the documentation process.

When asked if physical therapists could open their own businesses independent of other physicians, which is currently illegal, the ministry also said no, reasoning that “it would be too difficult to promptly respond to side effects or complications.”

Although the concept was proposed to help working couples, the Ministry of Gender Equality and Family said “the demand wasn’t verified.”

One councilmember said that despite the rejections, the group would carry on. “Although ministries rejected the new jobs, we will continue to come up with ideas for jobs that would benefit the country in the long run.”