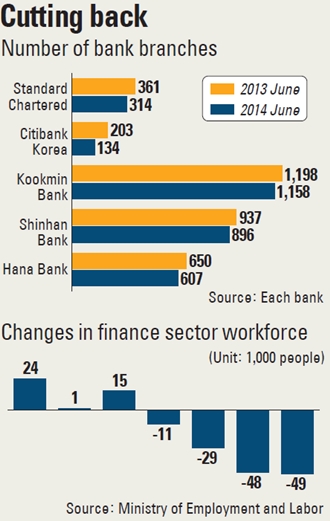 Kim Min-ah, a mother of a 4-year-old son and a 2-year-old daughter, is an IT-savvy worker who visits her bank less than twice a month.

“First of all, I am busy juggling work, babysitting and handling household chores,” Kim said. “Second, there is no need to go to the bank unless my security card [which gives access to Internet banking accounts] has problems.”

IT development has made banking incredibly convenient for busy office workers or mothers with toddlers who have no time to go to the bank.

But it’s bringing big changes to the banking industry.

Now that online banking transactions account for more than 75 percent of all transactions, according to data by the Bank of Korea, many commercial banks are closing down branches and restructuring their work forces.

About 270 branches of major commercial banks were closed from June 2013 through last June, leading to layoffs of thousands of people.

Ajay Kanwal, who took office as chief executive officer of Standard Chartered Korea in April, stressed that it is important to capitalize on IT resources in a changing financial market, while promising no branches will be closed this year beyond the 50 branches agreed to by the bank’s union.

The two foreign banks reduced their work forces by around 500 each during the period. Citibank laid off 642 employees while SC lost 459 positions through voluntary retirements.

The situation is not radically different at local commercial banks. KB Kookmin Bank and Shinhan Bank have each closed 41 branches as of last month. Hana Bank closed 43. KB laid off 176 employees, Shinhan laid off 60 and Hana 120, according to the banks.

“Although there are serious problems, I don’t think it is the worst situation for the industry,” said Kim Woo-jin, a research fellow at the Korea Institute of Finance. “It seems like the banks are downsizing because they added new branches or expanded businesses right after the IMF crisis in the late 1990s.

“The primary reason for shrinkage is low profitability,” he added.

According to data by the Bank of Korea, aside from the 75.5 percent of banking transactions done via the Internet or mobile devices as of June, 11 percent were face-to-face transactions at banks and 13 percent were through phone banking.

“Compared to the banking industry in advanced countries, the Korean banks have problems of rigidity in their wage systems and inflexibility in human resource management systems,” Kim said. “There should be smart measures to redistribute the current work forces in accordance with the changing financial environment led by IT development and increasing online transactions, because they still have to have people at physical branches provide face-to-face services that cannot be done online.”

From early this year, labor unions at the banks have been protesting banks’ “unfair restructuring practices” that have not been agreed to by the unions.

The umbrella union for the banking industry is scheduled to go on a one-day protest today to demand the government provide stabilized working conditions and stop shrinking work forces and employees’ welfare benefits.

Specifically, the umbrella union is demanding a 6.1 percent increase in wages, extension of the retirement age to 60 and including incentives and bonuses in base salaries.

It will be the first industry-wide demonstration in 14 years.

At a press conference at the union’s office in central Seoul yesterday, the union announced that members will continue striking if the first round doesn’t achieve what it want. The union is planning a second round in October and a third in November.

The union expects about 65,000 members will join the protest.

Local securities firms have been suffering poor earnings due to lackluster investments by private investors and decreased profits from commissions as Internet and mobile transaction services have taken over their roles.

Samsung Securities transferred about 130 employees to other subsidiaries of Samsung in last July. The situation worsened, so the company implemented a voluntary retirement program in April. About 300 employees, or 11 percent of a total of 2,700, have recently left the company.

Considering the current situation in the overall financial industry, the government has started to make policy changes.

On Monday, the Ministry of Strategy and Finance, the Ministry of Employment and Labor and the Financial Services Commission said the government will look for ways to help institutions maintain their work forces, including wider use of the wage peak system at financial institutions, in which older employees stay on the job longer after reductions in salaries.

According to the government agencies’ monitoring, the number of newly employed people in the financial industry has been declining for the past four years. Last August, there were about 54,000 additional employees in the industry. The figure in July was a reduction of 49,000.

“It seems difficult to improve the current employment problem in the financial industry due to structural problems like the market’s saturation and increasing online transactions,” said an official at the Employment Ministry. “The government will try to minimize shock of the work force restructuring on the industry by providing subsidies for institutions that keep the current employment levels.”