Focus of fall hiring season is on loyalty

Focus of fall hiring season is on loyalty 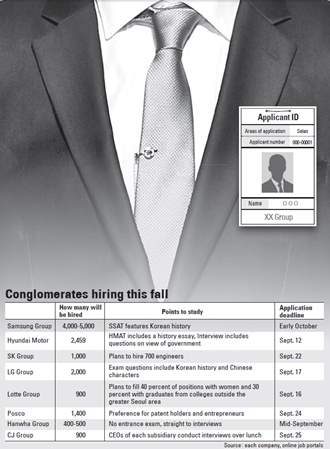 The autumn hiring season has arrived and the nation’s major conglomerates as well as small and midsize companies have started announcing their recruitment schedules.

In Korea, the hiring season in the second half is often called the blooming season for job seekers because companies are usually looking to fill more positions than in the first half.

But this autumn is likely to be tougher for recent graduates, particularly for those who majored in liberal arts or humanities.

According to local online job portals, many conglomerates surveyed said they would stick to their rule that only 20 percent of new hires are humanities majors while the rest are science and engineering majors.

People with humanities backgrounds will find the job market tough due to conglomerates’ focus on engineers.

In spring hiring, 95 percent of SK Hynix’s new hires were engineering majors, and Samsung Group, Hyundai Motor and LG Group hired at least 80 percent of them.

Companies’ hiring preferences differed depending on each industry’s situation. Heavy industries and IT have been showing good performances and will be recruiting less people this fall, while food and beverage companies are recruiting more to overcome sluggish performances.

According to a survey by online job portal Incruit of 825 Korean companies, only 31.3 percent of IT companies said that they will hire college graduates this fall, continuing a decline that started in 2011. This was the lowest level among the nation’s 12 major industries.

According to the survey, this is largely due to an oversaturated market and the government’s regulations on mobile carriers. Analysts said this has created demand for workers with experience in the industry rather than new graduates.

The survey showed that the requirements of new hires will also be different this fall. Companies said they will examine the applicants’ views of history and the government to determine if he or she fits into their corporate culture.

Many companies will also put more emphasis on loyalty to their corporation.

This fall, LG Group will get rid of the “spec” section of its application, which included job seekers’ college GPA, standardized English scores, extracurricular activities and internships.

Instead, LG said it will focus on cover letters, in which candidates are asked to explain why they chose to apply to LG.

LG will also allow candidates to submit applications to three LG subsidiaries at once. For instance, a candidate can write LG Electronics as their first choice, LG U+ as their second and LG Display as third.

“Job seekers who apply to us without a specific work plan are highly likely to be rejected,” said Lee Myung-kwan, a human resources director at LG Group. “I personally care a lot about why the candidate applied to LG and to this specific department.”

Hyundai Motor is also putting more weight on loyalty and views on the Korean government and history.

After Hyundai Motor asked its applicants to write an essay on their perspectives of history last year, conglomerates like Samsung, SK and GS Group have done the same on their entrance exams.

Hyundai Motor last year asked for a series of short history essays on subjects that aimed to expose job seekers’ personal beliefs and how he or she would apply them to their jobs. One of the questions asked applicants to write about an important historical invention to test their qualifications as engineers.

“What recruiters want from candidates is a good understanding of Korean history,” said Byun Ji-sung, a manager at Job Korea, another online recruitment website. “Korean conglomerates expect their employees to have basic knowledge of their country.”

Analysts advise job seekers with a humanities or liberal arts background to choose companies that are not technology oriented.

“Humanities majors should go for CJ Group, at which cultural understanding and open-mindedness are crucial. It is a company that has traditionally preferred humanities majors,” said one HR official.