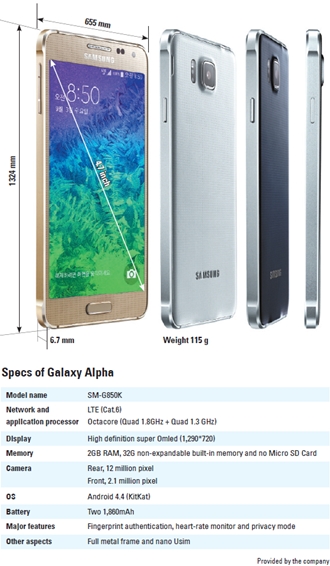 The race to the end of the year between the world’s two smartphone giants starts today with Samsung Electronics releasing its latest smartphone into the Korean market.

The move comes after a leaked video of Apple’s new iPhone 6 on the Internet yesterday stole the attention of consumers and put the focus on which company will win the next round.

For Samsung, the latest edition of its Galaxy series with a full metal frame, which distinctively separates it from previous models, comes just six months after the company released the Galaxy S5 in February.

The iPhone 6, which is scheduled to make its first official appearance next week, is the company’s first upgrade since the iPhone 5s was introduced last year.

Samsung said yesterday in a release that Alpha will be the thinnest smartphone available in Korea at only 6.7 millimeters (0.26 inches).

It is equipped with a 4.7-inch HD Omled display and offers LTE-A, which is three times faster than LTE. Notable features include fingerprint authentication, a sensor that monitors heart rate and a protection system dubbed privacy mode.

However, the finger authentication system and the privacy mode are also on the S5.

Additionally, some of Alpha’s other features, such as battery capacity, fall short of the S5. While S5’s battery is over 2,600mAh, Alpha’s is only 1,860mAh, and the S5 boasts a 1.6-million megapixel camera compared to 1.2 million megapixels for the Alpha.

The lower price and more modest features are interpreted by market experts as part of Samsung’s new strategy to lure customers looking for smartphone features at a more affordable price.

Samsung plans to release Alpha in 150 countries starting next month.

Korean mobile carriers that will be selling the smartphone over the counter are ramping up their marketing.

Although the Alpha comes is three different colors - charcoal black, frost gold and dazzling white - SK Telecom will have an exclusive model that comes in slick sliver.

KT announced yesterday it is offering a free battery pack to the first 5,000 customers who purchase the smartphone and a chance to purchase a Galaxy Tab 4 with Wi-Fi for 49,000 won.

The release of the Alpha is part of a one-two punch with the much-anticipated release of the Galaxy Note 4 that will blunt the debut of the iPhone 6 next week. Samsung’s latest phablet will be released today in Seoul, Germany, China and the United States.

Samsung Electronics’ IT and mobile CEO, Shin Jong-kyun, will host the Note 4 launch event in Seoul. Previously, he hosted overseas launch events for the Galaxy Note 3 at the IFA in Berlin a year ago and the Galaxy 5S in Barcelona in February.

It has been reported that instead of managing the global unveiling in a foreign country, he is orchestrating the event from the Seoul headquarters as a sign of the product’s importance to the company.

The Galaxy Alpha has already attracted the interest of tech bloggers and consumers even before Samsung unveiled detailed specs yesterday.

When the Korean company released pictures of its latest smartphone with a full metal frame and rounded edges, some raised questions over the hardware design, noting that the smartphone looked very similar to the latest iPhones.

However, Samsung denied such rumors, saying through its official blog last week that the design was based on its own previous mobile phone released in 2006 named Card Phone.

The company stressed it has applied the metal frame, which is the first for a Samsung smartphone, not only to improve the stylishness of the product but also to produce a more comfortable grip.

It said the metal was the most appropriate material for making the smartphone lighter, thinner and more durable. It said it chose to round the edges in order to give a more rhythmical flow and refined look. In addition, it plays an important function by lessening surface impact as edges are the weakest areas of a smartphone.

Despite the news of immediate sales of Alpha today and the announcement of the Galaxy Note 4, Samsung Electronics’ stock tumbled below the 1.2 million won mark for the first time since 2012.

The biggest reason behind the drop in the tech giant’s share value was its forecast of deteriorating operating profit. Samsung, which became the first Korean company to reach 10 trillion won in annual operating profit last year, is expected to see its operating profit fall below 7 trillion won for the third quarter largely due to the worsening mobile device business, according to FN Guide.

Even through July, the forecast for the company’s operating profit was slightly below 8.7 trillion won. The strong won against the dollar is said to be a major contributing factor to the negative performance.