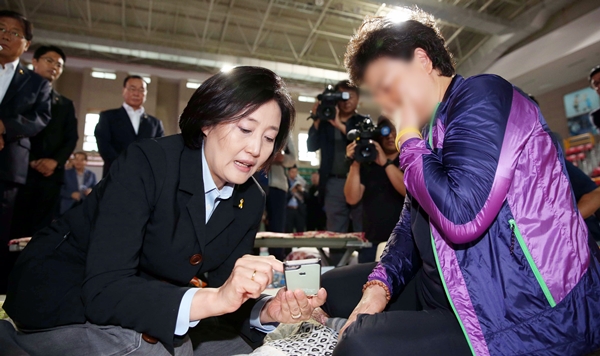 Amid the prolonged political stalemate over the special Sewol law that has nearly paralyzed parliamentary functioning, the main opposition’s interim Chairwoman Park Young-sun paid a visit yesterday to Jindo, South Jeolla, where she consoled the families of the victims of the April ferry disaster.

Park’s visit to Paengmok Harbor and a Jindo gymnasium, where dozens of grieving relatives are still waiting for the remains of the 10 still missing in the sinking to be returned, came a day after the National Assembly’s 100-day regular session kicked off on Monday.

“My daughter has not come home since she went on a school trip [on April 15]. ... Please be considerate of us [still waiting at the harbor] through the mind-set of parents and fathers,” said the mother of Huh Da-yoon, a Danwon High School student who is among the missing bodies, during her meeting with Rep. Park.

Following her meeting with the families, Rep. Park urged the government to do its utmost to find those still unaccounted for.

“The one thing that all the families asked me was to help the government do its best until the last victim is found. And there is no doubt that it is the responsibility of the government to [find the last person],” the interim leader of the New Politics Alliance for Democracy said.

She also touched on the families’ disappointment in the ruling Saenuri Party and the government for what they feel is indifference toward the ongoing suffering of the relatives still camped out in the Jindo gymnasium.

“The families here are very disappointed that neither the Saenuri nor the government has visited them [lately],” she said.

Park’s visit yesterday came amid an ongoing political gridlock over the terms of the special Sewol law, particularly on whether to empower a fact-finding committee to be established under the special law with the authority to investigate and indict suspects - an option vehemently opposed by the ruling party.

Amid the protracted wrangling, the two parties have yet to arrange a parliamentary schedule, with the exception of today’s plenary session. Lawmakers plan to vote today on a motion to strip Saenuri Rep. Song Kwang-ho of his immunity from arrest over bribery allegations and to approve the appointment of Supreme Court Justice nominee Kwon Soon-il.

In a last-ditch effort to break the impasse before the Chuseok holidays, National Assembly Speaker Chung Ui-hwa will serve as a mediator for the two parties and the families to reach a middle ground, according to Rep. Park.

By law, only the prosecution holds the authority to indict suspects.