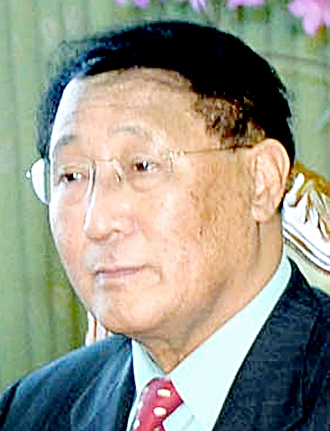 Veteran North Korean diplomat Kang Sok-ju is bound for Europe later this month, his first solo trip abroad since he became the secretary of international affairs of the Workers’ Party.

The rare journey by the former North Korean vice foreign minister appears to be Pyongyang’s latest move in recent months to engage with the international community to escape from its isolated status.

Kang is expected to visit Germany, Belgium, Switzerland and Italy as early as this week, according to government sources yesterday.

A South Korean government official added that Kang is “expected to have exchanges with political parties there that have relations with the Workers’ Party.”

“It appears to be a move [by Pyongyang] to request [that] the international community ease sanctions on North Korea,” the official added. “Because North Korean diplomacy appears to be becoming more aggressive recently, we are observing it carefully.”

Kang, a close confidant of the late Kim Jong-il who served as vice foreign minister from 1986 to 2010, was involved in talks between the United States and North Korea in the 1990s on its nuclear program.

He was also Pyongyang’s negotiator behind the landmark 1994 Geneva Agreed Framework that called upon the regime to freeze the operation and construction of nuclear reactors and set the basis for North Korea-U.S. relations.

For that reason, some North Korea observers have speculated that Kang may meet secretly with Japanese or U.S. officials during his trip to Europe.

The Kim Jong-un regime appears to have changed diplomatic tactics for the first time amid deteriorating relations with China. Pyongyang has also made moves to bolster economic cooperation with Russia and Mongolia and resolve the abduction issue with Japan.

Since his inauguration in April, North Korean Foreign Minister Ri Su-yong has toured Southeast Asia, where he engaged in multilateral diplomacy for the first time last month during an Association of Southeast Asian Nations (Asean) security summit in Myanmar.

Ri is also scheduled to visit New York to attend the opening of the 69th session of the UN General Assembly in late September, the first time in 15 years a top North Korean diplomat has been present. At the session, he is expected to make a keynote address, in line with both of his only predecessors - Foreign Ministers Kim Yong-nam in 1992, and Paek Nam-sun in 1999.

Pyongyang’s channel in New York, where the UN is headquartered, serves as an informal means of communication with the United States, as the country does not have official ties with Washington.

“As the negotiations between North Korea and Japan began, Pyongyang’s diplomacy has gradually taken off,” said Koh Yoo Hwan, a North Korean studies professor at Dongguk University. “And in order to overcome U.S. containment, it appears that [North Korea] is initiating new talks.”

Utilizing a diplomatic strategy is a novel approach for the Kim Jong-un regime, especially considering that it has traditionally relied on military threats and saber-rattling to grab international attention.

While analysts point out that such a shift may not produce immediate improvements in relations between Pyongyang and Washington, or provide a breakthrough in the denuclearization issue, the change in itself is a welcome one.

But although the North’s diplomacy can be interpreted as positive, it could also end up acting as a double-edged sword for South Korea, experts say.

“So far, as inter-Korea relations has become an issue, North Korea has been engaged in a one-act play where it could storm out of talks and end the discussion,” said Kim Young-soo, a North Korea and foreign policy expert at Sogang University, “but now, a serialized soap opera is unfolding.”

“In the 1990s, North Korea engaged in a ‘tongmi bongnam’ strategy [in which it opened the door to the United States while shutting out South Koreans], putting its priority on U.S. and North Korean relations rather than North and South. And it is only our loss if we end up alienated in such a game,” he said.

This is especially relevant amid a marked upswing in South Korean and Chinese relations recently.

Later this month, Kim Kwan-jin, the chief of South Korea’s National Security Office (NSO), is also expected to head to Washington, where it is anticipated that he will discuss North Korean issues with National Security Adviser Susan Rice.

Analysts here say it is an opportunity for Seoul to persuade North Korea to open up to both the United States and the South.

“North Korea is running about here for diplomatic purposes, ultimately to try to sway South Korea and the U.S.,” said Choi Kang, the vice president of the Asan Institute for Policy Studies. “It is trying to win over other countries that can tell South Korea to have a more flexible posture.”