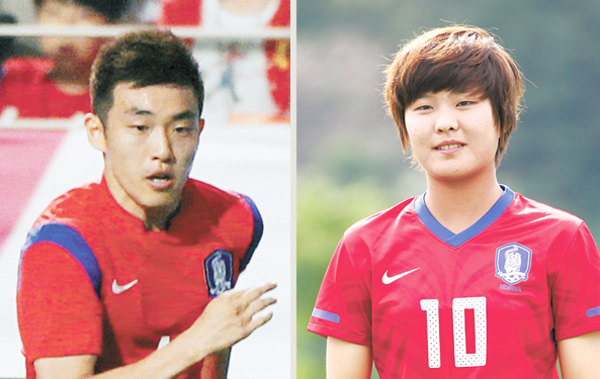 Defender Yoon Suk-young of the Queens Park Rangers and forward Ji So-yun of the Chelsea Ladies didn’t know each other in Korea but had heard of each other’s name as they are both well-known football players.

But at an Aug. 24 match between the Chelsea Ladies and Birmingham WSL in London, Yoon was spotted by fans cheering for Ji, who helped the team to victory with a goal and two assists. When they met with Ilgan Sports, an affiliate of the Korea JoongAng Daily, three days after the Chelsea Ladies match, they said they had become like brother and sister since they are among the few Koreans leading a life overseas as a footballer. Yoon, 24, is one year older than Ji.

“I had never seen a [Chelsea] Ladies match and I was surprised that many Korean fans were there,” said Yoon, who has been sidelined since the beginning of the season due to an ankle injury. He is undergoing rehabilitation, but took a day off to watch Ji play. In the audience, Yoon pleased Korean fans by posing for pictures with them and giving autographs.

“I was very happy that she played very well in that match,” he said. “I knew that she was a good player, but she was way better than I thought. As a fellow Korean, I’m very proud of her and I felt like I wanted to play for my team as soon as possible after I saw her score a goal.”

Ji said she was pleased that Yoon attended her match and was able to perform better after she realized that he was cheering for her.

“I actually was suffering from a cold during that match, but I had to play my best since the match was among the top two league teams,” Ji said. “I realized Yoon came to see me after the first half and was so appreciative because I knew he was in the middle of a rehabilitation program. I promised that I will cheer for him when he plays a match in the future in return for his support.”

Unfortunately, the two are having very different experiences at their club teams. Ji has been one of her team’s best forwards and the Chelsea Ladies are competing for the title with a league-leading record of 6-2-2 (20 points). Liverpool and Birmingham City are tied for second with four more matches to play.

“My goal is to win the season title with the team,” Ji said. “I also want to score a goal or make an assist in each of the remaining games.”

Yoon encouraged her. “I think it’s a mission she is able to complete for sure because she is a very good player.”

Yoon, however, isn’t as confident in his own team after QPR lost its first two 2014-15 matches. Yoon has a lot of competition ahead to secure a place on his team’s starting 11.

“I strongly believe that Yoon will make it through his tough rehabilitation program and play very well just like he was playing before,” Ji said. “We want to let fans in England feel the power of Korean football.”