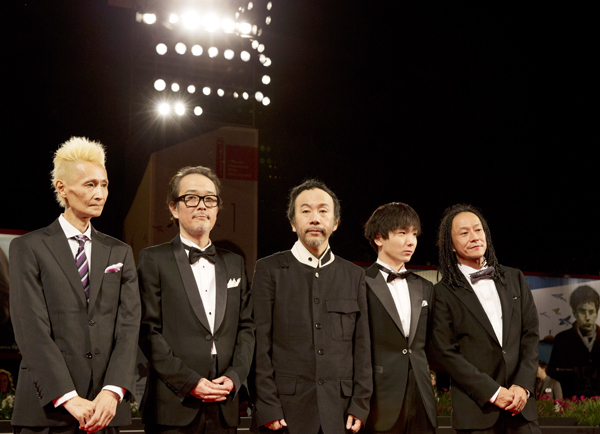 From left: Composer Chu Ishikawa, actor Lily Franky, director Shinya Tsukamoto, actor Yusaku Mori and actor Tatsuya Nakamura pose on Tuesday for photographers as they arrive for the screening of “Nobi” (Fires on the Plain) at the 71st edition of the Venice Film Festival in Venice. AP

LONDON - One of the most powerful and violent films to be shown at the Venice Film Festival this year, Japanese director Shinya Tsukamoto’s “Nobi” (Fires on the Plain), delivers a stinging anti-war message bathed in blood.

A remake of a 1959 classic, the film, shown late on Monday and in competition for the main festival prize, sticks to the plot of Kon Ichikawa’s earlier film about defeated Japanese troops in the Philippines in World War II.

The version by Tsukamoto, whose past horror-and-fantasy-tinged films have earned him a reputation as an auteur of the strange, pumps up the volume in terms of severed body parts, bloody stumps of arms, maggot-ridden corpses and starving soldiers descending into cannibalism.

Tsukamoto also plays Private Tamura, the main character in the film, which dwells on the dead and the dying among Japanese troops towards the end of the war. It shows the limits of human endurance, and the desperate measures people will take to survive.

“In the last year all the people that had experienced war are getting older and older and many of them have died, so there are very few people who can testify and say what war really is,” Tsukamoto told Reuters in an interview on Tuesday.

“At the same time, the political situation in Japan is getting worse and worse, and it’s going back to the past, militarily speaking, and also politically speaking,” he said, referring to Japan’s recent moves to bolster its military.

“So I just wanted to somehow push everyone’s feelings towards these kinds of conditions. I want to address the audience as normal people to say ‘We are in danger,’ but at the same time I want to warn politicians and people who are in charge, saying ‘You are making bad choices and you must be careful not to go back to the past.’

“This is the reason I made this film.”

The film is based on the 1951 novel “Fires on the Plains” by Ooka Shohei. Tsukamoto also said he felt that history is not necessarily always on a forward trajectory, and civilization can regress.

“I think that there has been an evolution from beast to human being and it’s taken such a long time, and a lot of people have died for this evolution in history and sometimes we go towards the future but sometimes we stop and we go back to our past, breaking this kind of evolution and I think this is amoral,” he said.

“It’s not normal and it should be different because human beings should go forward and not forget their past because this is the worst thing they can do.”

The soldier Tsukamoto plays is a self-described intellectual and writer who is rejected by his much-reduced unit because he suffers from TB.

He is sent to a field hospital that is little more than a hut in the jungle and is littered with mangled people. The doctor says his ailment doesn’t matter and sends him back to his unit - but takes away a handful of yams Tamura is carrying, which are virtually all anyone has to eat.

Tamura shuttles between his unit - where he is punched by his commander and ordered to go back to the hospital or kill himself if he is not admitted - and the hospital, which will not let him in.

While sitting outside the hospital, wondering what to do, American planes attack, killing the doctor with machine-gun fire and turning the hut into an inferno that kills everyone inside.

Tamura then begins an odyssey in the lush green jungle where the foliage, shown from aerial views, conceals the violence and carnage taking place below. The corporal is occasionally charitable, giving one of the few yams he has to someone else, but instantly regrets doing so.

Later along his journey, he runs into a pair of soldiers he first met outside the hospital and they tell him they have been hunting monkeys and drying their meat in order to eat it.

He gives them his rifle so they can hunt more, but when Tamura follows one of the men into the jungle he discovers that the man is hunting other soldiers to kill and eat.

“Actually one of the messages in this film by the director is not one the Japanese want to see,” Japanese actor Lily Franky, who plays one of the soldiers, said, referring to a desire among Japanese to wipe out memories of World War II and Japan’s role in it.

“The director is actually thinking about releasing the film next year on the anniversary of the end of the war,” Franky told Reuters.

“Normally on this day, Aug. 15th ... most Japanese don’t want to watch the TV programmes scheduled on this, but we hope to release this film on that day next year, so that’s the mission of the film [to make the Japanese audience think about this subject].”