Why the ice bucket challenge worked

Why the ice bucket challenge worked 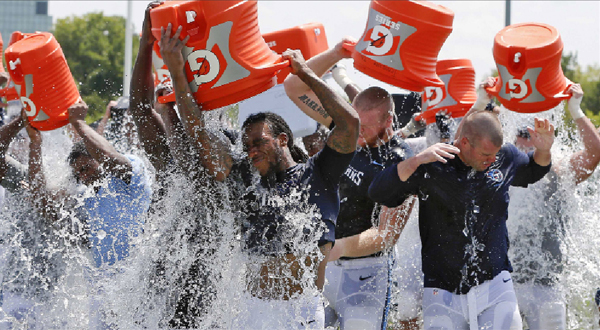 Tennessee Titans players take part in the ALS Ice Bucket Challenge and pour ice water over their heads after NFL football practice Wednesday, Aug. 20, 2014, in Nashville, Tenn. Former Titans linebacker Tim Shaw has announced that he has ALS, and visited the facility and witnessed the event to raise money and awareness to battle the disease. [AP/NEWSIS]

There’s a pretty simple explanation for why the Ice Bucket Challenge became this summer’s most successful social-network meme and raised such an extreme amount of money for the ALS Association, which battles Lou Gehrig’s disease: It created a safe environment in which people could display their altruism.

The exhibitionist nature of social networks has been exhaustively discussed and even credited with creating a narcissism epidemic. Narcissistic personalities do their best to exploit the networks’ potential both for self-promotion and for lifting their self-esteem.

They particularly like posting pictures and videos of themselves, and of “special” people they find it flattering to be associated with. “Since narcissists believe their status increases when they are associated with other special or high-status people, posting pictures of desirable friends may give narcissists a means of bolstering their egos,” psychologist Shawn Bergman and collaborators wrote in a 2010 paper on the subject.

The Ice Bucket Challenge is a narcissist’s bonanza. You get to show yourself doing something marginally daring. Everybody will see how fit, handsome, or witty you are - and how altruistic! Though the original deal was to donate to the ALS Association or pour a bucket of ice water over one’s head, people have typically done both and made no secret of it.

What’s more, you get to associate yourself with all the famous people who are doing the same thing. There’s Bill Gates, who probably didn’t need the extra publicity or attention to his charity work but still built an elaborate contraption to douse himself, probably figuring he could up the ante in the ALS collection drive. There’s also Justin Bieber, who showed off his body and nominated all his fans and President Barack Obama to upend those buckets.

There’s safety in crowds. If you’re bragging about doing something lots of others - and all those important people - are doing, you’re not really boasting. You’re showing that you fit in with the right bunch of people.

Don’t your motives still look shallow or self-serving, though?

“It is surprising to see so many people advertise their good deeds in that there exists a strong norm to be modest about prosocial behavior,” London Business School professor Jonathan Berman and a group of researchers wrote in a 2014 article.

After running various experiments, some of which involved posting reports of one’s good deeds on social networks, the group concluded that “bragging about prosocial behavior is special because it directly undermines the information that an individual is trying to convey.”

If you boast about your altruism, you are seen as less altruistic. To avoid this unwelcome effect, “people may create an appropriate context to discuss good deeds by steering a conversation in a direction that makes it appropriate to discuss prosocial behavior.”

The Ice Bucket Challenge provides the perfect context: You don’t talk about giving money to fight Lou Gehrig’s disease. You discuss the feel of that icy water on your pate, or Bieber’s narcissism, or Gates’s geekiness. It solves the “braggart’s dilemma” - whether to tell others about your altruism - by removing the suspicion that your motives are selfish.

It’s such a perfect bit of social engineering that the ALS Association’s effort to trademark it is perfectly understandable. Who cares about niceties, or Matthew 6:3, when something works to raise lots of money for a good cause? This is a case where the end may well justify the means - as long as no one gets killed.

Have I taken the Ice Bucket Challenge? No. Have I donated to the ALS Association? None of your business.