China’s No.1 in the stock market

China’s No.1 in the stock market 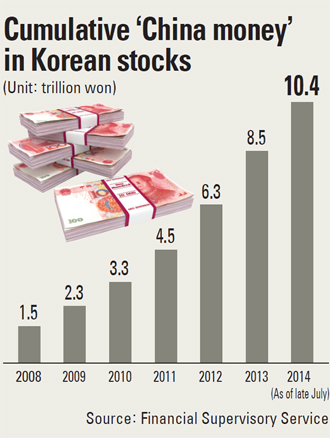 Chinese money has been pouring into the domestic stock market, with investors net purchasing 1.9 trillion won ($1.86 billion) in shares this year to surpass the United States as the No. 1 foreign country investing in Korea.

“The only foreign funds to consistently purchase Korean stocks since the financial crisis are China’s and America’s,” said Jeon Jong-kyu, a researcher at Samsung Securities.

Financial experts say China’s “buy Korea” trend is the result of the country’s rapid growth of capital, the expansion of sovereign wealth funds and the Qualified Domestic Institutional Investor (QDII) system that allows financial institutions to invest in offshore markets such as securities and bonds.

“When ‘China money’ continues its steady inflow, it will have a positive impact on supply and demand,” said Lee Chang-mok, the head of Woori Investment and Securities research center. He added that China’s impact on the Korean stock market could become larger as capital from government-related institutional investors grows.

Capital inflow from China comes in three ways: its sovereign wealth fund, the social security fund and QDIIs. Among sovereign wealth funds worldwide, China’s are growing fast with three in the top 10: China Investment Corporation (CIC) in fourth place at $652.7 billion, the State Administration of Foreign Exchange (SAFE) fifth at $567.6 billion and the National Social Security Fund (NSSF) ninth at $201.6 billion. About 40 percent of CIC’s funds is in stocks.

“China money will become a long-term purchasing force,” said Cho Yong-jun, head of Hana Daetoo Securities research center. “When the Chinese financial market becomes more open, foreign investments will flock to China. [This will lead] the Chinese government to strongly recommend that institutional and retail investors invest in foreign stocks in order to control the country’s currency and exchange rate.”

The focus now becomes what kind of stocks Chinese investors are eyeing. Experts agree that large-cap shares will be among the first to be chosen. “There is a higher interest in companies that are easily recognized by foreign investors and high in capitalization,” said Lee. Chinese investors “also will prefer global corporations like Samsung Electronics and Hyundai Motor.”

Jeon echoed that view. “Institutional investors - with their high operational funds - will invest in shares with large capitalization above all,” he said.

Other stocks likely to benefit include retail, which is popular in China’s domestic market and among tourists. Stock prices for corporations like cosmetics companies that are popular among the Chinese are steadily rising. “The number of Chinese tourists visiting Korea will increase 20 percent each year and reach 10 million in 2018,” said Jeon. “Keep an eye out for corporations that show increasing consumption by Chinese tourists.”