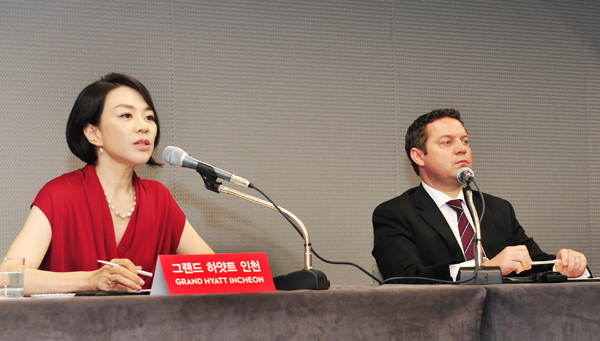 Heather Cho, president of KAL Hotel Network, seated next to the general manager of Grand Hyatt Incheon, Paul Wright, speaks yesterday at the opening ceremony for the hotel. The hotel, formally known as the Hyatt Regency Incheon, operating on Monday. Provided by the company

INCHEON - With the rebranding and expansion of the Grand Hyatt Incheon, the president of KAL Hotel Network, which owns the property, said yesterday the chain will broaden its customer base and create synergy with Korean Air.

Korean Air and the hospitality company are part of Hanjin Group.

The hotel business has become increasingly important for the group as other affiliates such as Hanjin Shipping and Korean Air struggle.

Heather Cho, the group’s president and daughter of Hanjin’s chairman, said she expects the newly reopened hotel to appeal to more customers with its wider array of facilities and conference rooms. 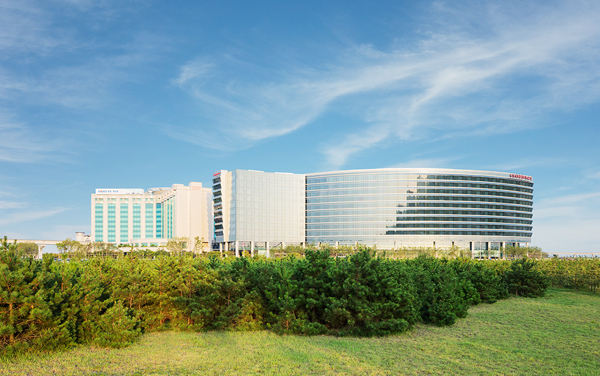 The Grand Hyatt Incheon is the 41st Grand Hyatt in the world and the largest outside North America. Provided by the company

With the revamp, the hotel has a new West Tower with a children’s pool, fitness facilities and 500 guest rooms, bringing the total number of rooms to 1,022. The new tower is connected to the East Tower via a sky bridge.

Cho said the opening date was set to coincide with the Incheon Asian Games to accommodate athletes and visitors. The Games begin Sept. 19.

“We were in a little hurry to open the hotel ahead of the Asian Games,” said Cho. “The hotel is an official partner of the Incheon Asian Games and we have worked closely with the organizing committee. I believe we will definitely benefit from the event because the hotel has easy access to Incheon International Airport.”

The group signed a memorandum of understanding with the city of Incheon and Incheon Free Economic Zone Authority to build the Hanjin Medical Complex.

Cho said the influx of foreign tourists to the medical complex may help boost business for the Grand Hyatt Incheon.

“I believe that a lot of Chinese tourists will visit the medical complex,” she said. “And we expect to accommodate the tourists who come for medical benefits.”

At a cost of 270 billion won, the complex will contain specialized centers for various diseases.

A research and education facility will be built next to it on 23,100 square meters (5.7 acres) of land at a cost of 110 billion won. Along with the medical services, a support complex will have lodging and a senior citizen center at a cost of 120 billion won, according to Hanjin.

Cho said the business of Korean Air is closely related to that of KAL Hotel Network.

“The hospitality service and the airline service are interwoven,” she said. “We’ve taken part in various partnership programs and will continue to work with Korean Air through the mileage program and other events.”

She also commented on a stalled project in Songhyeon-dong in central Seoul.

KAL Hotel Network had planned to build a cultural complex and hotel on a site between Gyeongbok Palace and Insa-dong.

But the Seoul Metropolitan Government blocked the project last year, citing its negative effect on nearby schools.

The Park Geun-hye administration, however, is moving to ease the regulation on hospitality construction near schools.

“We are in the process of discussing the matter with the government,” she said. “Some say we are trying to build a hotel, but it is a cultural complex, and KAL Hotel Network is still committed to the project.”