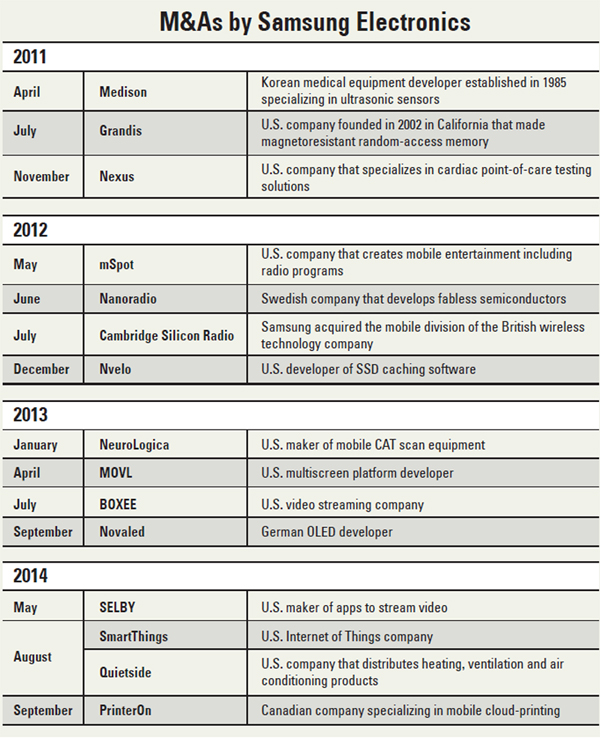 Samsung Electronics has become much more aggressive in mergers and acquisitions in recent years as it tries to solidify the competitiveness of its mobile business competitiveness and secure future growth.

According to the Korean tech giant yesterday, it has acquired PrinterOn, a Canadian mobile cloud solution company.

Founded in 1983 in Ontario, PrinterOn allows users to output materials on their mobile devices - from smartphones to laptops on any printer.

It added that the Canadian company will operate independently as a wholly owned subsidiary of Samsung Electronics Canada.

“We are very excited that PrinterOn has become a part of the Samsung Team,” said Gregory Lee, president of Samsung Electronics North America . “PrinterOn has a long history of innovation and a deep understanding of mobile cloud-based solutions.”

“We are pleased to become part of Samsung Electronics Canada,” said Angus Cunningham, CEO and President of PrinterOn.

Samsung in recent years has pursued competitive companies ranging from mobile solution and content developers to chipmakers and even medical equipment manufacturers.

Before 2011, Samsung’s approach had been considered conservative, but things quickly changed as the global business environment and competiveness in the mobile and IT division intensified.

“We are faced with a real crisis today,” Chairman Lee Kun-hee said in March 2010. “Global companies are crumbling and we don’t know how it will turn out for Samsung. In fewer than 10 years, products and business that have represented Samsung will disappear. We have to start all over and we have no time to hesitate.”

Starting with Medison - a Korean company that specializes in medical equipment such as ultrasonic sensors - Samsung took over three companies in 2011 alone, including another medical product developer in the United States. It was a signal that Samsung was expanding its health-related businesses.

The following year, it became more aggressive by taking over four companies in the United States and Europe.

Last year, it took over five companies. Samsung even bought stakes in other companies, including Korean smartphone manufacturer Pantech in June 2013.