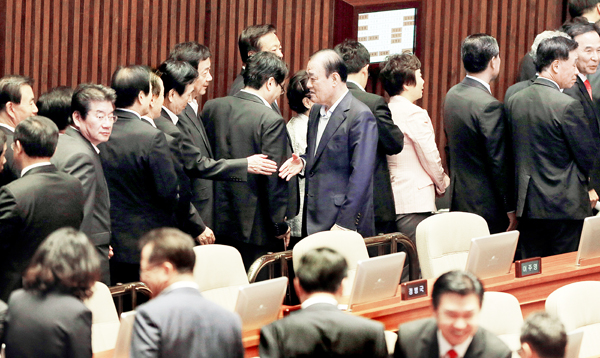 Saenuri lawmaker Song Kwang-ho, center, shakes hands with fellow lawmakers waiting to vote on a motion to strip him of his immunity from arrest yesterday in the main conference hall of the National Assembly. By Kim Hyung-soo

Lawmakers yesterday rejected a motion to strip Saenuri Rep. Song Kwang-ho of immunity from arrest in a vote during a plenary session, a decision that is expected to draw immense backlash as a myriad of pending bills have sat idle for four months.

In a vote with 223 lawmakers, only 73 supported allowing prosecutors to take the accused assemblyman into custody, while 118 moved to let him keep his immunity. Eight lawmakers abstained, and 24 votes were not counted.

The prosecution has already sought a pre-trial arrest warrant for the 72-year-old lawmaker. Song stands accused of pocketing 55 million won ($53,955) in bribes from private railroad companies in 2012 in exchange for favors while he worked under the parliamentary committee for land, transport and maritime affairs.

Legally, lawmakers are immune from arrest by the prosecution during a parliamentary session unless the National Assembly allows it through a vote.

The outcome came as a shock to the both ruling and opposition parties.

However, the ruling Saenuri was quick to caution against the potential fallout from accusations that its lawmakers were attempting to protect one of their own as they remain mired in a political stalemate with the opposition New Politics Alliance for Democracy (NPAD).

Amid a prolonged parliamentary gridlock, not a single bill has been legislated since May 2, the result of continued wrangling over the terms of a special Sewol law, which would work to find the root cause of the April 16 Sewol ferry disaster, in which more than 300 people were killed.

“I want to emphasize that it wasn’t the party’s official stance to reject the arrest motion. The party let its lawmakers cast their votes [based on personal feelings],” Rep. Kim Hyun-sook, a spokeswoman for the Saenuri, said following the vote at the National Assembly.

Sensing the impending criticism, it added that it was unfair to shift all the blame onto the ruling party, especially considering the number of votes against stripping Song of his immunity and the number of Saenuri lawmakers who voted.

“One hundred thirty-six Saenuri and 114 NPAD lawmakers were at the session, while six were from minority parties. That is 256 in total. Of them, 223 voted,” ruling party lawmaker Kim Jae-won said before reporters on his way out of the session. “Even if we assumed all 136 Saenuri lawmakers disapproved of the arrest, it still stops short of the 150 votes that opposed the arrest, which includes the abstentions and the uncounted votes. … Given that, it is not fair to shift all the blame solely on our side.”

Yet, when asked about the still larger role the Saenuri lawmakers must have played in blocking the arrest warrant, Kim said he was “taken aback” by the outcome.

The NPAD’s interim Chairwoman Park Young-sun lashed out at the Saenuri over the outcome of the vote, calling it a “two-faced” party that allowed double standards.

But despite her vocal objections, it still didn’t save the opposition from criticism that some of its members also helped the troubled lawmaker avoid being taken in. Song, a four-term lawmaker, is safe from arrest until Dec. 9, the last day of the 100-day regular session that kicked off on Monday.

The Saenuri and NPAD have yet to arrange a parliamentary schedule for the remainder of the regular session.