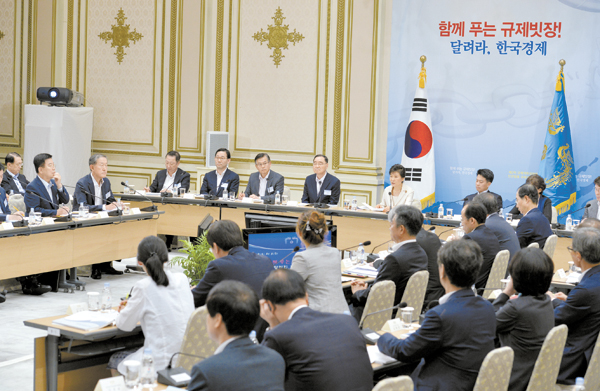 President Park Geun-hye presides over a ministerial regulation reform meeting yesterday at the Blue House in order to slash red tape that has been hindering investments by companies. [NEWSIS]

After a call by President Park Geun-hye to slash red tape that has tied up new investments by small and midsize companies, start-ups and private entrepreneurs, 90 out of 92 requests have been approved, according to the Public-Private Joint Regulation Advancement Initiative yesterday.

They include the simplification of hiring of foreign workers with E-9 and H-2 visas. Since June, employers have merely had to file a report to one of two institutions: the Justice Ministry or the Labor Ministry.

Additionally, foreign workers are also being given a break on the so-called return cost insurance.

This is a payment required from foreign employees to prevent them from departing the country or being deported before their contract expires.

Until recently, a foreign employee had to make a single payment within 80 days of his or her work contract going into effect. The insurance payment is 400,000 won ($392) for foreigners from five counties, including China and Indonesia, and 500,000 won for people from nine countries, including Mongolia and Nepal. For Sri Lankans it’s 600,000 won.

Instead of the employee having to pay a lump sum within 80 days of a work contract taking effect, he or she can now pay in installments within three months.

The deregulations are part of President Park’s three-year economic plan announced earlier this year to cut back on excessive regulations that were holding back businesses and investments.

She rallied her crusade yesterday by holding a second presidential meeting on regulation reform.

Among the red tape already eliminated: food made on the spot at traditional market such as tteok were not allowed to be sold through online orders on the grounds that it could be a health hazard.

Such deliveries have been legal since May on the condition that the owner of the store or an employee makes the delivery themselves.

Burdensome paperwork required of companies that want to be confirmed by the government as small and medium operations has been eased.

And duty-free alcohol preorders through the Internet are now possible.

According to the Public-Private Joint Regulation Advancement Initiative yesterday, most of the interested parties including private businesses were satisfied with the governmental push to slash red tape.

“The initiative is visiting industrial complexes and factory clusters once every month to listen to complaints,” said Lee Dong-geun, vice chairman of the Korea Chamber of Commerce and Industry and the head of the joint initiative.

However, 11 proposals are still awaiting lawmakers’ reviews to be implemented.

At the meeting yesterday, President Park once again urged government officials and business leaders to make aggressive deregulation efforts, saying that there is not much time before the economy falls back into recession and is sucked into an irreversible state of perpetual low growth.

“Our economy is at a critical time,” Park said in the meeting held at the Blue House. “Our competitors are making bold deregulatory moves while we have been too complacent and slow, making me feel a sense of urgency.” 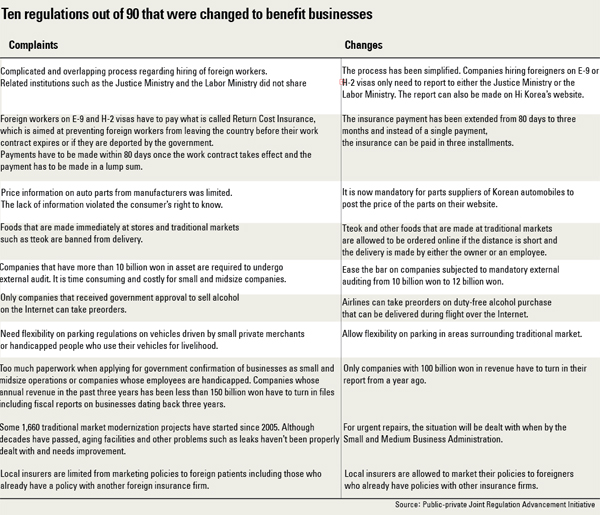 The deregulation meeting was initially planned to be held last month, but the president ordered it postponed, criticizing insufficient preparations by ministries.

“A number of deregulation bills are stranded at the National Assembly, and there is a lack of collaboration among ministries,” Park said. “Deregulation is also being delayed due to a backlash from some stakeholders.”

The president stressed that outdated and unreasonable regulations that undermine competitiveness of industries should be boldly reformed.

In the first meeting in March, Park harshly criticized the civil service community for their laid-back attitude about the subject. Her strong comments pushed government officials to take a more aggressive approach.

In fact, the first meeting lasted seven hours. Yesterday’s meeting was less than half the length of the first.

Lee, of the regulatory reform initiative, said one of the biggest factors preventing swift reform on red tape was a lack of cooperation from local governments.

“There are a lot more regulations on businesses by local governments than the central government,” Lee said.

“For example, the water bills at swimming pools are twice the rate at public bathhouses,” Lee said. “But when asked to lower those water bills, only 86 out of 162 governments accepted it.”

The KCCI said it plans to announce data showing the regulation levels of 229 local governments next month. The business lobbying group hopes this data will help bring changes as the central bank could use it to either penalize or compensate local governments that have been cooperative in improving business environments.

Meanwhile the Ministry of Land, Infrastructure and Transport reported to the president that it will relax a total of 20 regulations focused on redevelopment of cities and buildings.

Currently, those facilities are allowed to have small canteens or cafeterias. The Express Bus Terminal in Gangnam District, southern Seoul, has entertaining and shopping functions, becoming a hub for both transportation and shopping, but smaller terminals don’t.

“Operators of those infrastructure facilities will be able to make profits, and consumers can satisfy their needs for shopping and culture while using the infrastructure,” an official at the ministry said.

The ministry also decided to simplify the administrative process for city planning and management. Facilities that have similar functions but are called by different names will be integrated.

Individuals will also be able to build sports or camping facilities in greenbelt lands that were restricted by the government. But by city, county and district, only one individual or entity will be given the chance to develop the preserved lands.

The ministry aims to utilize the greenbelts to meet growing demand for outdoor sports facilities.