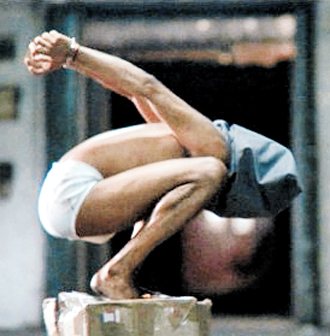 A photo of captivity survival training. Courtesy of Amnesty International

Two commandos died and one was injured during captivity survival training by the Special Warfare Command, military authorities said yesterday.

The deaths were the latest in a string of fatalities of service members, and the military is bound to be criticized for its disregard for the safety of its soldiers. The military admitted yesterday there was no safety manual for the training.

According to the military, the accidents took place during training for how to deal with being captured by an enemy. The training is intended to teach special forces soldiers to endure interrogations and torture and how to possibly escape.

This is a new training program and the accidents took place as a few elite special forces commandos participated in a final rehearsal, the Army said. The military planned to provide the training to all members of the Special Warfare Command starting Sept. 15. That plan was halted yesterday.

According to the military, 10 commandos participated in the training by playing the role of captives.

“During the morning exercise, most of them managed to escape from the simulated captivity within an hour,” said an official of the Special Warfare Command. “The intensity of the training was strengthened in the later session and it appeared to have led to the deadly accidents.”

Among the 10 supposed captives, eight were put in solitary cells, while two were put together in a cell. They were all forced to kneel with their hands tied behind them. Their heads were covered with bags made of black nylon cloth, the Army said. The aim of the training was to break free from the binds and escape.

“When we become captive, we will face torture,” said a member of the Special Warfare Command. “If you are wearing a bag on your face and put into a tiny cell, you will experience extreme fear. The goal of the training was overcoming that fear.”

The instructors and the 10 commandos playing captors tightened the strings of the bags on the captives’ heads during the second session, said Lt. Col. Kim Hong-jeong, who is in charge of planning the training at the brigade.

Around 10:30 p.m., some of the captives cursed and yelled due to their discomfort, but the drill instructors did not stop the program because they decided that was a part of the exercise.

“There was no brutality during the training,” Kim said.

After one of the captives collapsed, the program was stopped and the conditions of the participants were checked. Two more were found to be barely breathing.

While the first staff sergeant regained consciousness after being treated in an emergency room at a nearby hospital, the other two died. The remaining seven were confirmed unharmed.

“Because the Special Warfare Command infiltrates enemy territory first, its members have a higher risk of being held captive,” a command official said. “They need training to resist interrogation and escape. Although we had trainings in the past, we did not conduct them for some time. We added this new exercise at the end of last year because we wanted to intensify the training program.”

Sources said the military started research in April to prepare for the exercise. Four instructors are veterans with up to 23 years of experience. The protocol was modeled after a U.S. program for its elite Special Forces, also known as the Green Berets.

Although the military said there was no violence or torture used during the training, criticism flared that the military operated the rehearsal without proper safety measures. The three participants had to be transported to a nearby hospital through ambulances dispatched after a call to the 119 emergency hotline, not military ambulances.

Drill instructors, who were supposed to observe the participants from the hallway of the cells, left their positions during the training.

“I have not seen any safety manual related to this particular training,” said Lt. Col. Ahn Dong-bo, a public affairs officer from the Special Warfare Command. “It is regretful that the accident took place during the first trial of the program, although we made thorough preparation since April.”

“We sent an investigation team to review the entire system,” said Col. Na Seung-yong, public affairs officer of the Army. “We will stop the training and punish anyone who did any illegal actions.”

The Army promised a transparent investigation, noting that it is aware of public skepticism of the military’s integrity in deadly incidents involving its members.