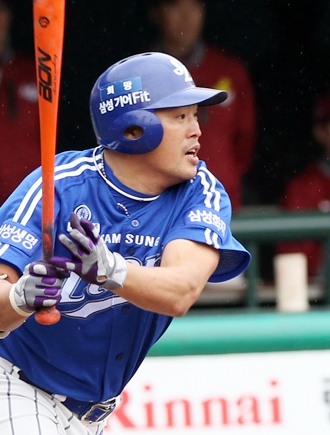 In baseball, the spotlight is usually on sluggers such as Park Byung-ho of the Nexen Heroes, who leads the league in home runs, or ace starting pitchers such as Kim Kwang-hyun, who is expected to move to Major League Baseball next year. Getting on base just doesn’t resonate with fans.

Samsung Lions outfielder Park Han-yi doesn’t share their point of view, saying hitters in the middle of the lineup would never get 100 RBIs in a season without teammates on base.

The 35-year-old scored the 1,000th run of his career against the SK Wyverns on Aug. 23 and became ninth on the all-time list in the Korea Baseball Organization.

Ilgan Sports, an affiliate of the Korea JoongAng Daily, sat down with Park to hear his thoughts on his career and the game.

Q. You’ve finally reached the 1,000-runs-scored plateau. How does that make you feel?

A. I actually cared about that record too much, I think, because I had not performed my best lately. I’m happy now, and I think I can play my best baseball.

Why did you care so much about it?

I actually tried not to, but it just happened, so it caused me to make some mistakes in the field that I didn’t used to make. I feel like I’ve finished my biggest homework assignment ever.

So, you’re ninth in runs scored in KBO history. Do you know the first eight?

Of course I do [Laughs]. Becoming the ninth player … it sounds like I’m that old now. It is such a great honor to have my name among all those great players. I’m very excited.

It must be a meaningful mark for you since this is your second big individual title after the most hits in a season in your 14-year career.

Absolutely, especially when you are leading off or hitting second. If you want to win a game, you have to score more runs than your opponent.

I realized that I scored many and brought many wins to the team. Since recently I have mostly hit second, I also focused on doing what the manager wanted, things like a sacrifice bunt when the leadoff guy was on first. If no one was on base, I then focused on getting on.

People generally underestimate the value of players like you who aren’t home run hitters. What do you think about that?

Many people think a home run is the highlight of baseball, but not everyone can be like my teammate [KBO all-time home run king] Lee Seung-yeop. I think those hitters at the top of the lineup deserve respect for getting on base and scoring runs. Those sluggers in the middle of the lineup can make 90 or 100 RBIs per season because there are people like me.