Plans for future of energy revealed

Plans for future of energy revealed 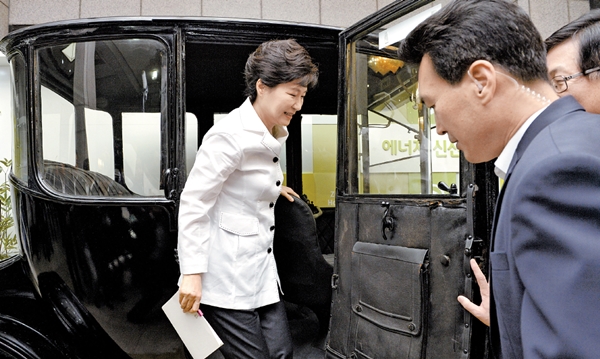 President Park Geun-hye gets out of an electric car invented by Thomas Edison before joining a discussion about the future of energy in Korea, held at Kepco’s headquarters in Gangnam District, southern Seoul, yesterday. [NEWSIS]

The Ministry of Trade, Industry and Energy yesterday announced new plans to support the energy industry, including opening up the industry to the private sector.

The ministry said at a meeting at Korea Electric Power Corporation’s (Kepco) headquarters that it would open the country’s first energy exchange market in November, through which privately-run commercial buildings, markets and factories can sell electricity they saved back to the nation’s sole power distributor, Kepco. In the market, which will be operated by Kepco affiliate Korea Power Exchange, existing generators and regular businesses can compete fairly.

Starting next year, the Energy Ministry will give out business permits to any company that is developing smart energy storage systems (ESS). Generators, distributors and brokers will receive extra screening before they are given a permit.

President Park Geun-hye attended the meeting and promised to carry out any deregulations that could push energy innovation in the private sector.

“To nurture the future energy industry, the government will keep working to change old policy regulations that may hinder the private sector from participating in the energy market,” Park said.

Starting next year, the government will offer a new electricity plan for private companies with an ESS. To encourage the use of ESS, the Energy Ministry’s monthly plan will charge less for electricity used between 2 a.m. and 5 a.m. so that businesses can use their stored electricity during the day, when electricity is more expensive.

Also next year, the ministry will give power cords to electric car owners so they can charge their cars at home. The cord keeps track of how much electricity is used to charge the car and the price that Kepco will charge for electricity from the cord will be similar to the price of charging at an electric car station, which is much cheaper than standard electricity prices at households.

The Energy Ministry also said yesterday that a team of 14 local manufacturers will invest about 150 billion won ($147 million) in the industry. The team, including Samsung Electronics, Hyundai Motor, SK Hynix, Posco and major battery makers such as LG Chem, are working on a project to develop ESS facilities and batteries.