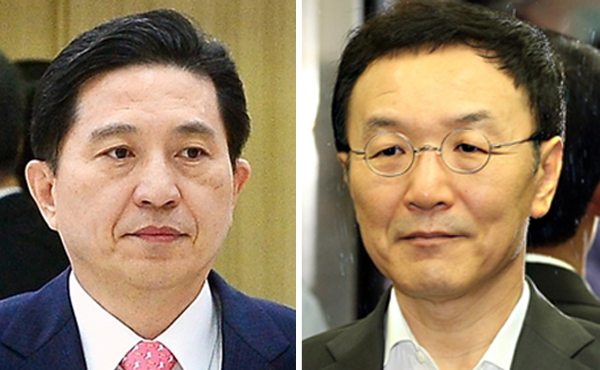 A boardroom feud at KB Financial Group that lasted for nearly half a year has come to an end with the bank’s chief executive officer resigning and official punishments for both the group chairman and the CEO raised.

Saying that the conflict between the two men seriously damaged the banking group’s operations and public image, the governor tightened the severity from its second lowest to a higher level, which prohibits the two from landing a job within the financial industry for three to five years.

“During the process of switching its network system, the top management of the holding company and the bank committed wrongdoings as serious as crimes,” Choi said at a press conference. “It is shameful that the top management of a financial company, who should take [public] trust as serious as life itself, failed to recognize the seriousness of the situation and showed no accountability.”

The governor said the FSS confirmed the heavy punishment for Lee, while it will propose to the Financial Services Commission (FSC) to impose the same punishment on Lim. The action from the FSS may serve as pressure for Lim to step down, but he has not yet done so. The FSC will make its final decision on the group chairman later.

The FSS has full supervisory control over operations of banks, insurers, savings banks and credit card companies, while the government’s FSC oversees the country’s financial holding companies and securities firms.

It was the first time an incumbent chairman of a financial group or a CEO of its subsidiary bank received such heavy punishments since the financial holding company law was enacted in 2000.

It was also the first time the FSS governor has turned down a punishment proposal made by the committee.

The FSS committee on punishment deliberation, composed of nine experts from the private sector, advised the organization to give the men milder punishments two weeks ago.

The feud was sparked in May when the bank’s CEO requested an investigation into the computer system switch from IBM to Unix, citing manipulation of data that was used in the decision making.

The feud was considered the worst in the banking industry since the Shinhan management feud in 2010 that ended up with all three top management figures - the Shinhan Financial Group chairman, vice chairman and the bank’s president - leaving the organization.

According to an FSS investigation that took place from May through June, the bank’s executives distorted a report on the changing of the computer system written by an outside consulting firm in a way that favored Unix, and reported it to the board. The executives were found to have manipulated the results of the benchmark test of the Unix system and deliberately lowered its estimated cost from 305.5 billion won ($299 million) to 189.8 billion won.

The FSS found Chairman Lim was aware of all risks and problems that would occur if the bank adopted Unix, but he didn’t take any action.

Immediately after the FSS decision, Lee decided to take full responsibility and step down.

“I finished all my duties as the bank CEO,” Lee said. “I believe the authority made an appropriate judgment on my actions.”

Lim may take the opposite tack and appeal his punishment to the FSC. KB Financial Group in a statement released yesterday said it was disappointed with the FSS decision and will do all its best in trying to restore KB’s reputation.

“Until now we have refrained from taking actions in order to prevent a major internal dispute,” the statement claimed.