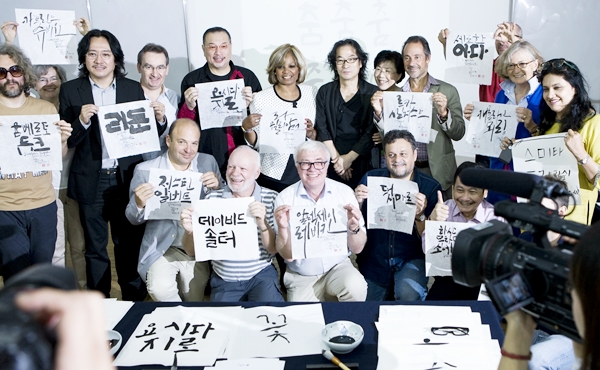 Cultural leaders from 16 different countries hold up their names in Korean. On Monday, the delegates learned calligraphy as part of their three-day visit to Korea for this year’s Culture Communication Forum. [NEWSIS]

The Korean government has been promoting Korean culture by parading K-pop, K-drama, K-food and so forth globally. But these may not be the most appealing factors to everyone.

Sixteen cultural leaders who were invited to the Corea Image Communication Institute’s annual discussion forum said after a three-day tour around Seoul that they were amazed at how innovative and design-oriented the country is, and suggested Korea should now promote “K-Design.”

Marking its fifth anniversary this year, the Corea Image Communication Institute (CICI) once again invited a group of culture experts from around the world to Korea, from Aug. 31 to Sept. 2, to experience different aspects of what the country has to offer, as well as to discuss their impressions and give advice under the topic “Culture-Mirror and Trigger of Change.”

Choi Jung-hwa, president of CICI, said the trip’s program prior to the discussion forum was designed for delegates to “experience Korean culture through their five senses.” The tour included the Dongdaemun Design Plaza; the Leeum, Samsung Museum of Art; the National Museum of Korea; the Hyundai Card Design Lab and its head office; and the Korea Furniture Museum, as well as a moonlight tour at Changdeok Palace and a hansik (traditional Korean cuisine) experience.

The delegates gathered for the forum at the Westin Chosun Hotel in central Seoul on Tuesday, to talk about their impressions and to give advice.

“Being here first-hand, it was such an amazing discovery for me,” said Donna Williams, chief audience development officer at the Metropolitan Museum of Art. “One of the important things I learned was how innovative you are and how much that is a part of your culture.”

Echoing Williams’s comment, Justin Albert, director of the National Trust Wales, said he did not recognize this innovation on his first trip here.

“When I first visited Korea two years ago, I noticed that you are a round society. I saw it in your flag, in your hospitality and many more [places],” said Albert. “Now, on my second visit, being a little bit more familiar, I was amazed at your innovation.”

Most of the delegates praised the designs they saw at the Korea Furniture Museum and even the windows and doors of the royal palaces. They said they realized that Korean design seems simple, but it’s not.

“I think design is the real force of invention in Korea,” said Catherine Chevillot, the director of the Musee Rodin in Paris. “We are all very impressed by the visit to the Hyundai Card Design Lab. Many of the designs there were something entirely new for me. All the designs have details yet it’s simple and practical. We don’t know how to do that in France. If it’s practical, it’s ugly.”

Chevillot added that she had a preconception about Korea before this visit, which is her first.

“I think that this force and this creativity should be presented in national exchanges and exhibitions, fairs and many more,” said Chevillot. “It has to be shown more. I said to the president of Hyundai Card during the visit that until that day I thought Swiss design was the best in the world. But that day, I discovered that it wasn’t.”

The delegates, however, warned that Korea’s fervor for change should not come at the cost of culture.

“What strikes me most in this visit to Korea is how homogenous the country is,” said Humberto Duque, a visual artist from Mexico. “I think this has helped Korea to take that leap into the future, and as a Mexican citizen, I think we have a lot to learn from that. But with progress, technology and outstanding development comes a great responsibility. And it’s up to you to preserve that and bring a better future to children and the next generation.”

David Salter, editor in chief of Australia’s “The Week” magazine, said not to be too obsessed with what aspect of Korean culture would appeal to other countries.

“I am a little concerned that so many people I’ve talked to in Korea have almost an inferiority complex about the way their culture is viewed by other nations,” said Salter. “Every country’s culture is the same in short-hand terms. Australia is just the opera house and kangaroos. America is hamburgers and apple pie. What I am saying is that it’s very hard to project the entire culture to the rest of the world.”