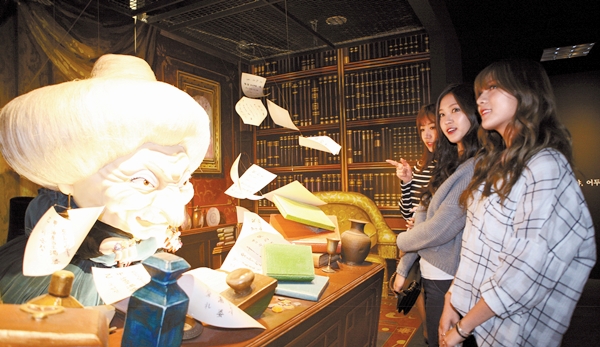 From left: Members of Korean girl group A Pink, Kim Nam-joo, Oh Ha-young and Son Na-eun look at one of the installations set up at Studio Ghibli’s diorama exhibition held at the I’Park Mall in Yongsan, central Seoul. Provided by the exhibition

Upon entering a dimly lit room, the monstrous structure from Hayao Miyazaki’s “Howl’s Moving Castle” greets visitors as the popular animation’s familiar background music tickles the ears. For a moment, visitors believe they have stepped into Miyazaki’s imaginary world.

The surreal display is part of the Studio Ghibli diorama exhibition, a unique show at the I’Park Mall in Yongsan District, central Seoul, that recreates some of Studio Ghibli’s most memorable scenes into miniature models and life-size figures.

Studio Ghibli is one of the world’s leading animation studios, best known for churning out distinct characters and heartwarming stories crafted by celebrated animator Miyazaki - “My Neighbor Totoro” and “Spirited Away” to name just a few.

“When I visited Lagunasia [a Japanese theme park] last year where Ghibli’s 3-D exhibition was being held, I thought that Korea need to do something like this too,” said Jeon Yong-duk, CEO of the event’s organizer, Think Bridge, during a press conference Tuesday at I’Park Mall.

“I was thinking about putting together an exhibition that could give hopes and dreams to the busy modern people who don’t have time to look around and take a break.”

Finding a venue to accommodate the pieces was challenging, added Park, because some of the installations are more than four meters (13.1 feet) in height.

The exhibition began last year in Japan to promote the company’s upcoming animation “The Wind Rises.” This is the first time all of Ghibli’s representative works can be viewed in one place, however, because the Japanese version of the event was held in two parts.

At the show, some of the installations invite audience participation, such as asking viewers to peek through a small hole in a wall to spot a favorite character or two.

“It is the second time we have visited Korea to hold an exhibition,” said Hoshino Koji, a representative of the Ghibli Studio at the press event. “We appreciate the great support that Korean visitors showed in our ‘layout exhibition,’ held last year.”

“It is of course our biggest priority to do well with the animation at theaters, but we have also put a lot of effort and time into this exhibition as well, so I hope Korean visitors will like it.”