Ahead of the official opening of IFA in Berlin, which is the largest consumer electronics show in Europe, Lee Don-ju, head of strategic marketing for Samsung Electronics’ mobile business division, unveils the Gear VR, which is a virtual reality headset powered by Oculus technology. [NEWS1]

Samsung Electronics released its latest smart gadgetry - the Galaxy Note 4, the Note Edge, the smartwatch Gear S and the Gear VR, a virtual reality device - and expressed confidence in its ability to compete with new products soon to be introduced by Apple, such as an iPhone with a larger screen.

“We were the first to develop a smartphone with a larger screen and we take pride in that,” said Lee Young-hee, executive vice president of the mobile division, in Berlin on Wednesday after the Korean tech company held its launch event two nights before the official opening of the IFA technology show.

“I trust that we will do better than our competition,” she added. “We have a lot more experience and know-how on multitasking and the use of styluses, and this will put us in the lead.”

Although Lee never mentioned the competitor by name, it was obvious that the comment was aimed at Apple, which ditched its own philosophy of keeping the smartphone no bigger than four inches after Steve Jobs passed away in October 2011.

Jobs believed that the most ideal smartphone size was small enough to be used comfortably in one hand.

“You can’t get your hand around it,” Jobs said about big phones in July 2010 during an event unveiling the iPhone 4. “No one’s going to buy that.”

Jobs may be spinning in his grave, but the smartphone landscape has evolved and larger phones are the future. Apple has seen its market share erode as rivals including Samsung have begun offering a wider variety of choice in terms of size.

Apple was forced to changed its strategy, including offering a larger iPhone and the cheaper model, the iPhone C.

It’s reported that Apple is supersizing the iPhone 6, which will be debuting next week and comes in two sizes: 4.7 inches and 5.5 inches.

Globally the phablet market, dominated by the Galaxy Note with its 5.7-inch screen, only accounts for 7 percent of the total smartphone market, according to a study released by Flurry more than a year ago. In fact, smartphones with screen sizes between 3.5 and 4.9 inches dominate with 69 percent.

In Korea, phablet popularity is much higher, with 41 percent, and devices with screens as big as 3.5 to 4.9 inches account for 54 percent.

But a survey by Accenture in June showed that global consumers especially in emerging markets want smartphones with larger screens. 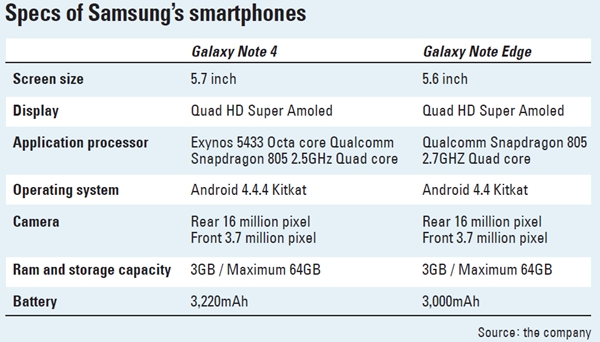 Demand for such supersized smartphones was higher in emerging markets including China and India.

In India, 67 percent were planning purchases of phablets while 66 percent of the respondents in China felt the same. Additionally, 51 percent of Korean consumers polled were planning to buy a phablet.

Analysts say the trend is shifting to larger screens as smartphones play a more extensive role in daily lives rather than being limited to Facebook updates and listening to music and making calls.

“The phablet screen size is hitting a sweet spot for a large percentage of consumers wanting a more digitally connected lifestyle,” said David Sovie, managing director of Acenture’s communications, media and technology, in a statement released in June.

“Phablet demand in developed countries is significant, yet even bigger business opportunities are coalescing in emerging markets,” Sovie said. “Among those, the most lucrative opportunity will likely be in China, because it is one of the world’s largest smartphone markets.”

“When the Galaxy Note was first introduced in 2011, the market was very dubious. But today everyone is competitively releasing large-size smartphones,” Lee said. “Don’t you remember that some even said the stylus [used with a smartphone] was a relic of the past and that such a large phone would fail?”

Meanwhile, Lee said Samsung will only release the Galaxy Note Edge, which grabbed the attention of techies across the world even before its unveiling on Wednesday, in only a handful of countries.

The smartphone is the first in the world to apply a curved display with a range of functions for the part of the display on the side of the device.

“It is a product that is targeted at showing innovative leadership and [Samsung’s ability] to create a new culture,” Lee said.

Although she didn’t say which markets would get the Galaxy Note Edge, she said it will definitely be available in Korea.

The company is said to have high hopes for the Galaxy Note 4, which ramped up not only its hardware but also its software, particularly since the Galaxy S5 released in February has been considered a failure.

In fact, for two days since Monday, Samsung’s stock retreated on speculation that its operating profit for the third quarter would shrink to 6 trillion won ($5,892) or even below.

In a survey of 27 brokerage firms, FN Guide estimated that Samsung Electronics’ operating profit for the third quarter would teeter just below 7 trillion won. If so, this would be a 31 percent drop compared to a year earlier. Hyundai Securities even forecast the operating profit would fall to 5.9 trillion won.

The biggest causes cited by the brokerage firms were rising competition from Chinese smartphone companies including Xiaomi, disappointing sales of the Galaxy 5S and the strong won against the U.S. dollar.

“The average selling price has fallen much faster than anticipated,” said Greg Roh of HMC Investment Securities. “The changes in profit will depend on the how well the Galaxy Note 4 will do in the third quarter.”

“Samsung need to change its strategy in improving its profitability such as reducing raw material prices instead of changing its marketing costs.”

Other than the Galaxy Note 4 and Note Edge, the Korean company also released an latest upgraded version of its smartwatch Galaxy Gear S and the oculus virtual reality device Gear VR.

As predicted, the Gear S uses the Tizen operating system and 3G connectivity. Unlike the previous version, the smartwatch can be used even a distance away from a smartphone.

Additionally, Samsung is trying to expand its entertainment business with its virtual reality headset Gear VR, which allows users to have a full 3-D experience in either a game, a music video or a movie.

According to the company, more than 1,500 people attended the event held at Tempodrom in Berlin.