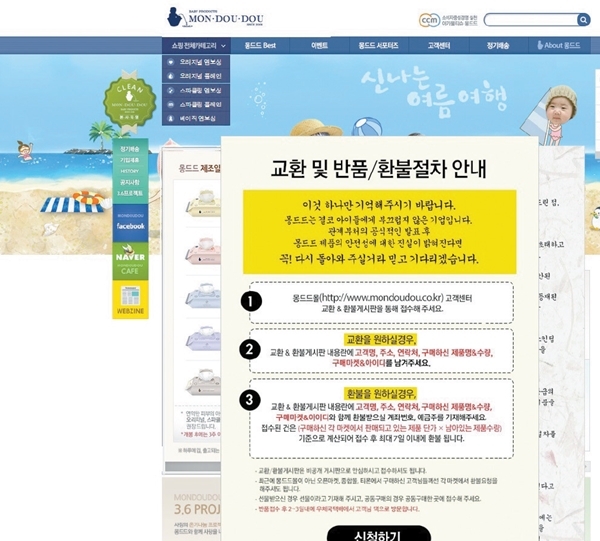 Mondoudou says on its website that its baby wipes are safe, after a news report that it used toxic levels of a chemical in the product. [Screen capture]

Baby wipes have become a staple in many households, but parents may have second thoughts about using them after published allegations that some brands contain toxic levels of cetrimonium bromide.

The Sisa Journal, a weekly newspaper in Seoul, reported last week that about 40 baby wipe products contained the compound.

Two local manufacturers - Mondoudou and Suomi - were identified as using unsafe levels of cetrimonium bromide, according to the newspaper, and other unidentified companies reportedly have come under scrutiny.

According to the report, the compound can compromise reproductive ability and the Ministry of Food and Drug Safety has identified cetrimonium bromide as a toxin. The report also noted it has been linked to dysponea, cancer and paralysis.

The Environmental Working Group, an health research and advocacy organization, said cetrimonium bromide is a skin toxicant and allergen. However, it also said the substance is “safe for use in cosmetics, subject to concentration or use limitations.”

Amid heightened concerns, the Ministry of Trade, Industry and Energy said on Tuesday that cetrimonium bromide is safe when used at concentrations below 0.1 percent, but producers of baby wipes are not required to disclose the percentages of chemicals used.

The ministry said it will investigation whether the companies exceed the recommended level.

Mondoudou contends its wipes undergo all safety tests required of baby products, saying, “The report is an unfair exaggeration that causes fear among consumers.”

The company also released a certificate it received from the Korea Testing and Research Institute verifying the product is safe. The state-run institute is tasked with conducting safety tests. Mondoudou also stressed it no longer uses cetrimonium bromide.

Suomi issued a statement echoing the position of Mondoudou.

The two companies are among the top players in the baby wipe industry.

Despite the companies’ efforts to ease worries and controversy, their websites have been flooded with demands for refunds.

No Cancer, a nonprofit organization dedicated to raising public awareness of cancer-causing substances, demanded an investigation of Mondoudou and Suomi.

“It was revealed that a strong toxic substance is included in products for babies,” the organization said in a statement. “But some local companies use more than 10 percent of the chemical in their baby wipes. And this can be a highly harmful practice. ”