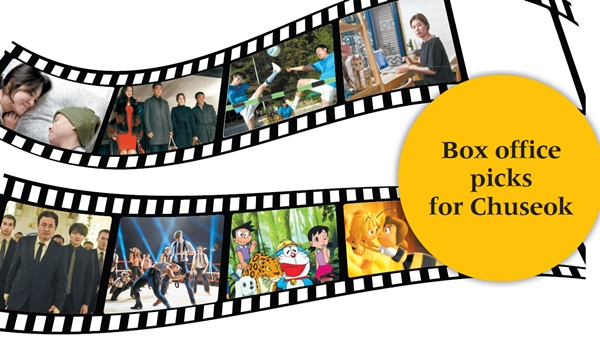 Screen shots of films screened at local theaters during the Chuseok holiday season. From top left: “My Brilliant Life,” “Tazza 2,” “The King of Jokgu” and “Hill of Freedom.” From bottom left: “Lucy,” “Step Up: All In,” “Doraemon the Movie: Nobita in the New Haunts of Evil - Peko and the Five Explorers” and “Maya the Bee Movie.”

After the period action film “The Admiral: Roaring Currents” broke box office records nationwide, this Chuseok will be quieter than usual in terms of heavyweight releases - especially compared to 2012 and 2013.

For the past two years, big-budget costume films such as “The Face Reader” (2013) and “Masquerade” (2012) hit cinemas around Chuseok, the Korean equivalent of Thanksgiving.

This year, however, there are no widely anticipated movies coming to the box office in time for the annual holiday.

But there are plenty of alternative options, ranging from action movies to dramas to quality art-house flicks, which are sure to appeal to a wide range of tastes.

Chuseok has always been a good time to head to the cinema as it is relatively less crowded at theaters during the long holiday period.

For those who have decided to stay in the city instead of visiting their hometown or making an overseas trip, the Korea JoongAng Daily has come up with a list of the movies screening at local cinemas during the five-day holiday, which begins Saturday.

“Tazza 2” may be the closest thing to a special “Chuseok film” this year with its starry cast, lighthearted storyline and tons of laughs.

Choi plays Dae-gil, the nephew of the good-natured male lead from the “Tazza” prequel, Goni, who had an innate talent for the Korean card game hwatu.

Dae-gil is an ambitious young man and is also a hwatu natural, a skill he discovers when his genuine love for Mi-na (Shin Se-kyung) leads him into the world of dangerous gambling.

With their risque wardrobes, Shin and fellow female cast member Lee Honey, a beauty pageant-turned-actress, are sure to lure some males to the cinema.

Actors Yoo Hae-jin and Kim Yoon-seok from the first feature also reappear as sidekicks in the film.

Faithfully based on Kim Ae-ran’s 2011 novel of the same title, “My Brilliant Life” features some of the nation’s best-known actors, Kang Dong-won and Song Hye-kyo, as a young, married couple.

The film is centered on their child, Ah-reum, and his terminal illness, progeria - a rare genetic disorder that causes premature aging. Ah-reum is only 16 years old, but his physical age surpasses 80.

Each character in the family endures hardship as a result of the disease - from making ends meet to dealing with deep wrinkles as a teenager - but they never lose hope.

The film is sad, but it brings tears to your eyes in a heartwarming way. It incorporates the themes of family, hope and happiness, and, by the time the movie finishes, viewers will have discovered a new appreciation for life.

After a line of Hollywood summer movies that featured non-human heros such as apes, transforming cars and turtle ninjas, Luc Besson’s latest action flick “Lucy” will show us some of our favorite Hollywood stars, including Scarlett Johansson and Morgan Freeman, in more straightforward roles.

In “Lucy,” viewers will also get a glimpse of Korean actor Choi Min-sik playing a villainous role as a mob boss.

The movie is based on the old adage that humans only use 10 percent of their brains. But what happens if the brain functions at its fullest? The film explores the catastrophic situation this could result in.

The film’s titular lead, played by Johansson, is a blue-eyed, pretty party girl who gets kidnapped by a Korean gangster and is forced to smuggle drugs in her stomach.

While on the airplane, Lucy is beaten by members of another gang. The drugs dissolve into her abdomen, leading her brain to function at a higher capacity.

This is the “Step Up” series’ fifth installment, and just like with many ongoing film franchises, it’s better not to get your hopes up too much about it.

In the case of this dance flick, at least, the sharply coordinated choreography and the head-nodding beats and grooves will give viewers a thrill. The movie is also being released with 3-D effects, so the experience will get even more exciting.

“All In” picks up from the fourth “Step Up” film, where the crew gained recognition by uploading videos of their flash mobs to YouTube.

The team flies to Los Angeles and Las Vegas from their hometown of Miami, for a turn on a bigger stage.

Some familiar faces from the second and third series, such as Adam G. Sevani, also make appearances.

In a testament to its quality, “Hill of Freedom” recently screened at the ongoing Venice International Film Festival.

The movie draws upon the quest of Japanese teacher Mori, played by Ryo Kase, who returns to Korea to find the woman he loved years ago.

During his stay in Seoul, Mori wanders around Bukchon, a neighborhood located in central Seoul that boasts its tranquil atmosphere and a historical background.

Mori fails to track down the woman, who goes by her surname, Kwon, so instead he writes letters to her about his daily life from Hill of Freedom, a cafe owned by Young-sun (Moon So-ri).

There are no dramatic or emotional moments throughout the film, which is expected considering Hong’s past record.

But the nonchalant approach to ordinary people’s lives is the film’s strong point, just like always in the director’s understated movies.

If you’re tired of gaudy commercial movies, this feature is for you.

It’s not a comedy, nor a sports flick: “The King of Jokgu,” crafted by rookie director Woo Moon-gi, encompasses humor, drama, satire and romance - all in its slightly more than 100-minute running time.

Man-sub has just returned to university after completing his military service, which is mandatory in Korea for most men, and finds out that the jokgu, or foot volleyball, court was removed in his absence.

As a result, the former jokgu champion appeals to his university’s chancellor to build a new court instead of worrying about his GPA score, which is remarkably low.

Every one of his peers spends their days building up their so-called “specs,” qualities, skills or test scores that they hope will lead to a good job, while all Man-sub wants to do is play jokgu and date a pretty girl.

The offbeat plot line and humor of “The King of Jokgu” brings laughter while satirizing the sad reality of a life focused on work, with no love and passion.

Doraemon the Movie: Nobita in the New Haunts of Evil - Peko and the Five Explorers

The character may be older than most parents of the children who will be watching the new movie at cinemas, but Doraemon’s everlasting popularity among kids is not about to fade anytime soon.

The latest feature-length version of the “Doraemon” animation is a remake of the 1982 film “Nobita and the Haunts of Evil,” in which Nobita and Doraemon take off on an adventure to an unknown land only to find the kingdom’s dogs being exploited by an evil minister.

The Doraemon crew then try to save the kingdom from evil.

The animation owes its adventurous and heroic plotline to the eponymous children’s book written by the famous German writer Waldemar Bonsels. It’s been reproduced in films and TV series many times, but this is the first time the film has been recreated with 3-D effects.

The story is about the young honeybee Maya, who is always curious, friendly, adventurous and willing to help others.

While once considered a problematic bee at the hive, later he comes to save the community from villains.