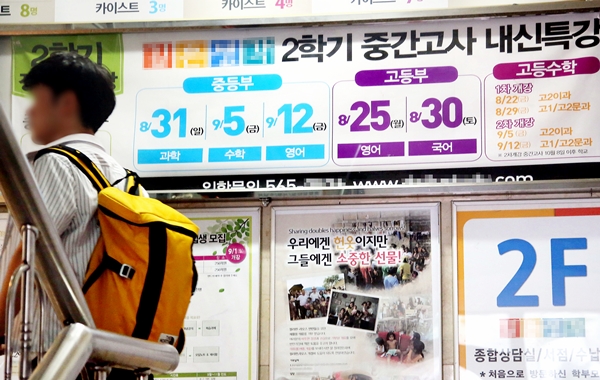 A student in Daechi-dong, southern Seoul, passes by posters for private tutoring centers that advertise advanced courses. By Kim Kyung-bin

Mr. Park, a high school math teacher in Seoul, admitted he is becoming increasingly worried about how to outline lesson plans for his extracurricular class after a ban on teaching advanced material goes into effect on Sept. 12.

Under the ban, which was passed through the National Assembly in February and will officially come into effect in seven days, schools will be prevented from offering students courses or teaching students material going beyond the scope of the regular academic schedule and curriculum.

The law aims to reduce the enormous pressure felt by many students to outdo their peers in order to win admission into an elite college.

It is also intended to curb a runaway private education market that has caused a breakdown in public education and burdened the household incomes of working-class families.

In Korea’s education-obsessed society, being accepted into a prestigious four-year university program is still widely considered a ticket to success that can dictate anything from one’s career path to a future spouse down the road.

Park’s dilemma, which many other teachers around the country also face, is that students are demanding their schools teach courses in advance to better prepare them academically.

“Students will not be interested in taking an after-school class if we don’t offer them prerequisite academic courses,” the 40-year-old said in an interview with the JoongAng Ilbo.

He asked that his full name not be revealed.

“For those at the top, advanced courses are particularly in demand because [students] are seeking to learn advanced mathematics, like integral calculus. With the ban now, I can’t give them what they want at a cheap price,” he added.

As schools nationwide brace for the all-out ban on proactive learning, those involved in the education sector - from teachers to parents and students - are increasingly concerned that the law is out of touch with reality.

Some have argued that the law makes the case worse by an obvious loophole: It does not regulate private tutoring centers, or hagwons, when it comes to advanced learning. Instead, the law merely forbids hagwons from advertising that they offer advanced-learning courses, while banning schools.

“Schools will certainly lose flocks of students to hagwons once they stop teaching advanced material,” said another high school teacher surnamed Nam. “Students will not concentrate on the school curriculum because it would repeat what they already learned in hagwon.”

Students will be most affected by the downsides of the ban and many have wondered about the law’s effectiveness. Educators say students’ concerns will inevitably result in higher numbers flocking to private education services, chipping away at the incomes of middle-class families.

“If my school stops providing an advanced curriculum, I have no choice but to go to hagwons because I don’t have much time left to prepare for the College Scholastic Ability Test,” said one student, surnamed Lee, who will take the exam next year.

The standardized test is a crucial factor in the college admissions process.

Parents are also skeptical about the effectiveness of the law, which bans hagwons from advertising advanced courses. “It is mostly through word of mouth that parents learn which private tutoring centers offer advanced courses. Reining in only on advertisements is just silly,” said the mother of a middle school student, who only gave her last name, Kim.

Another mother, surnamed Chung, 41, added that parents will have no choice but to send their children to private education classes if they fear their children would otherwise “lag behind.”

Amid growing worries, the presidential office on Tuesday approved the ban on advanced learning as the last legal step of its enactment, but included in it a minor revision.

The change will allow first- and second-graders to learn advanced material in their extra-curricular English classes.