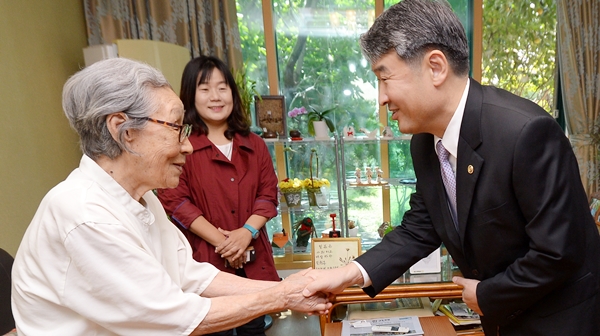 One of Korea’s few surviving former “comfort women,” forced into a Japanese military brothel during World War II, conveyed yesterday to First Vice Foreign Minister Cho Tae-yong that President Park Geun-hye must step forward to obtain an apology from Tokyo for its sexual enslavement of women and girls during its colonial occupation.

Ahead of the upcoming fourth round of regular talks between Seoul and Tokyo in working to resolve the issue, Cho sought out the viewpoints of the now elderly women who were forced in their youth into sexual slavery by the Imperial Japanese Army during World War II.

“[Park Geun-hye] needs to speak up [on our behalf], but since that is not happening, I am frustrated,” said Kim Bok-dong, 89, a victim who has over the years become an active voice for human and civil rights. “We have not seen our president have a proper conversation with [Prime Minister Shinzo] Abe, so our president needs to take initiative.”

She further voiced her concerns about Japan’s unresponsiveness, despite efforts from Seoul.

Cho visited the a group of elderly victims at their lodging in Mapo District, western Seoul, which is supported by the Korean Council for the Women Drafted for Military Sexual Slavery by Japan.

The council has held weekly Wednesday protests since January 1992, demanding a resolution as well as an apology. “Through the efforts of the comfort women victims, the issue has become a human rights problem not only in Korea but internationally,” Cho told her.

“If the issue of sexual slavery is resolved properly, [President Park] might meet with Prime Minister Shinzo Abe,” he added, “but in the current situation, in which Japan is not showing sincerity, a meeting would hold no meaning.”

He also referenced Navi Pillay, the UN high commissioner for human rights, who underscored in a statement in August that the comfort women issue was “not relegated to history, but continues to impede violations of victims’ human rights.”

“We will try our best to honor our sense of duty to history and through negotiation with Tokyo receive an apology from the Japanese government that may be acceptable to the victims,” Cho said during his visit, which came just ahead of the Chuseok holidays.

On Wednesday, a group of spouses of officials from the Ministry of Foreign Affairs also visited the House of Sharing in Gwangju, Gyeonggi, where another group of victims resides.

Korea and Japan held their first director-general meeting on the issue of wartime sexual slavery in April in Seoul. Those gatherings have been convened monthly.

The meeting in June was skipped due to Japan’s “re-examination” of the landmark 1993 Kono Statement, an apology to the women forcibly recruited by the Imperial Japanese Army.