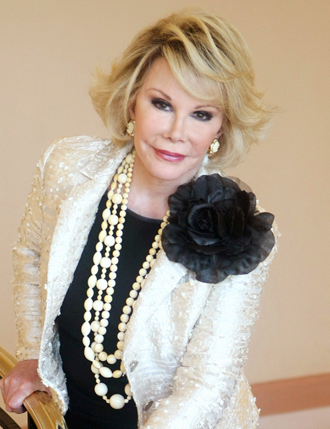 Joan Rivers, the pioneering comedian known for her acerbic wit, classic put-downs and for asking “Can we talk?” died on Thursday at the age of 81 in a New York hospital a week after her heart stopped during an outpatient medical procedure.

Melissa Rivers, the comedian’s only child, said her mother died peacefully, surrounded by family and friends.

“My mother’s greatest joy in life was to make people laugh. Although that is difficult to do right now, I know her final wish would be that we return to laughing soon,” Melissa Rivers added in a statement.

Rivers was the second leading American comedian to die in less than a month. Groundbreaking comedy star and actor Robin Williams, 63, hanged himself on Aug. 13 in California.

Fellow comedians, friends and fans took to Twitter to express their grief and sadness, and to praise Rivers.

“Joan Rivers will always be a pioneer. She paved the way for a lot of comedians,” tweeted comedian and talk-show host Ellen DeGeneres. “I’m very sad she’s gone.”

Brooklyn-born Rivers, who once described herself as “the plastic surgery poster girl” and often joked about her numerous cosmetic enhancements, suffered cardiac arrest during a procedure on her vocal cords at a Manhattan clinic on Aug. 28.

She was rushed to Mount Sinai Hospital, where she was put on life support.