Traditional events to enjoy this Chuseok

Traditional events to enjoy this Chuseok 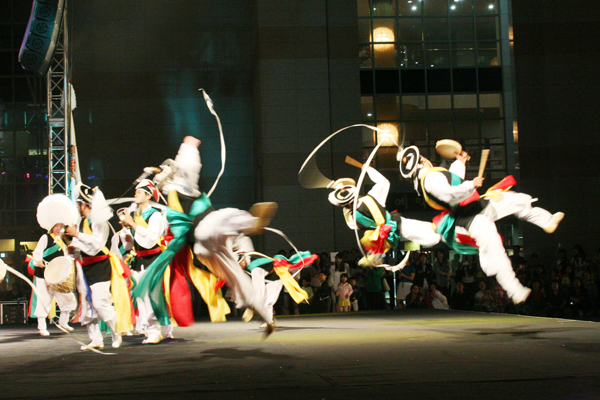 Chuseok, one of the country’s largest national holidays, has begun, but most people will be busy on Monday - the main day of the harvest celebration holiday - as mothers will be busy flipping jeon, (a pancake-like dish that’s a holiday staple) while fathers carefully set the table for charye (a veneration ritual).

But the vacation period, which extends to Wednesday for many people, is also an opportunity to enjoy cultural activities exclusively available during this festive season.

Here are some traditional activities and performances available to attend.

Those leaving the country for the holiday won’t miss out on tradition because Incheon International Airport is bringing various cultural events to its third-floor Passenger Terminal.
On Monday, from 11 a.m. to 5 p.m., visitors to the airport can try several activities, including making songpyeon (a half-moon shaped rice cake that is traditionally eaten during Chuseok), playing yut (an ancient shuttlecock game) and more.

At the Korean Traditional Culture Center, which is located inside the airport, music concerts will be staged from noon to 4:30 p.m. on the same day.

Hundreds of visitors watched traditional performances at the open concert hall on the transport hub’s third floor before setting off on their journey.

For more information about the events at Incheon International Airport, call (02) 2270-1203.

The National Center for Korean Traditional Performing Arts has organized a special show allowing audiences to experience changgeuk, or a traditional Korean opera, and “Arirang,” a Korean folk song, on the day of Chuseok.

The performance is divided into two parts. The first will be a musical celebration followed by the one-act changgeuk “Bak-Taryeong,” which will be presented by the Folk Music Group’s artistic director Ahn Sook-seon, as well as sori (narrative singing) performer Nam Sang-il.

The opera is about an older woman, Heungbo’s Wife, and a younger man, Heungbo, whose story unfolds through diverse folk songs from different regions, with Chuseok as its main theme. The couple sings the folk songs while splitting a squash into two. When the squash is open, a Taoist fairy shows up with a basket full of songpyeon, which she then shares with the audience.

The second part of the performance is the “Arirang Competition.” Eight teams that made it through a preliminary round will compete as they sing the folk song “Arirang.”

The groups include multicultural families and families with special stories. For example, one team composed of a mother and a twin brother and sister will sing their own version of “Arirang” to their grandmother, who was recently hospitalized after a stroke, while another made up of seven elementary students will sing the folk song with lyrics thanking their parents for working hard to look after them. A team of three generations - grandparents, a mother and two children - will perform “nitpicking Arirang,” in which the grandparents and the mother will sing to their children, scolding them for playing video games too often and telling them to be polite to adults.

While the judges decide on the final winner, the National Gugak Center’s Dance Theater group and Folk Music group will invite the audience to join in with a ganggangsulae, or a traditional Korean circle dance designated as intangible cultural property No. 8.

The performance starts at 8 p.m. on Monday at the National Center for Korean Traditional Performing Arts’ Yeonhee Madang in southern Seoul.

The performance is free, but entry is on a first-come, first-served basis.

This four-day Chuseok Feast, which runs from today to Tuesday, has 50 programs ranging from folk games to singing competitions for those staying in Seoul over the holiday.

On Monday, the day of Chuseok, there will be a folk-song competition where people can make the most of the festivities.

From Monday to Tuesday, different matches will take place every hour such as arm wrestling, pig wrestling, relay games and more.

On Sept. 9, on the front yard of the museum, interested parties can witness experts weaving hemp clothes using a loom.

Folk performances are also not to be missed. When the sun sets on Monday, Haenam Woo Soo-young’s ganggangsulae performance will be staged.

The ritual of making a wish on a full moon, which will be present on the day of Chuseok, is acted out in the dance.

For those with young children, a musical based on the famous Korean traditional fairy tale will be a good pick. “Brother Sun, Sister Moon” which Korean children are familiar with, will turn into a musical at the National Folk Museum of Korea.

Aside from performances, there are numerous programs where songpyeon and sikhye, or a sweet rice drink, will be shared well as programs allowing visitors to make their own versions of these treats.

For some expats missing their home cuisine during this traditional holiday, Chinese, Japanese and Vietnamese snacks will be sold on site.

Hangawi is Aug. 15 on the lunar calendar and is also another word for Chuseok.

First, at Lord Min’s house, visitors can learn everything about setting a table for charye as well as correct etiquette and the history behind it. Children, or even adults, will also be taught how to properly bow to ancestors. You can try making rice cakes in an old-fashioned way by striking dough with a rice-cake mallet, too.

At the Hanok Village’s Cheonugak Square, a traditional game of spinning plates will be organized. You can also try making your own tal (traditional Korean mask), kite, top and bow here.

Parents who don’t want their kids to loosen up too much during the holiday can take them to one of the lord’s houses where a so-called “village school teacher” will instruct them on ancient fables and phrases. There will also be various programs for children and young students such as treasure hunts and a puppet show.

Entrance to the Namsangol Hanok Village is free, but there are several programs with a charge. For more information, call (02) 2261-0502 or visit hanokmaeul.seoul.go.kr. 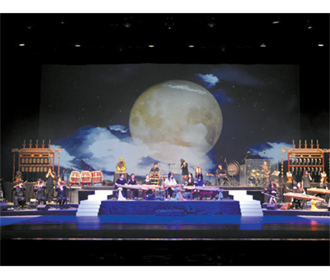 Sejong Center for the Performing Arts has been holding “Happiness of a Dollar” concerts each month, which invite audiences to watch a music concert for 1,000 won ($0.98).

To create a festive mood for Chuseok, the Sejong Center has incorporated gugak (traditional Korean music) into this month’s concerts.

According to the group, the works are selected to allow the Korean audience feel closer to gugak and cast off the prejudice that it is difficult to understand.