Creative economy is the future

Creative economy is the future 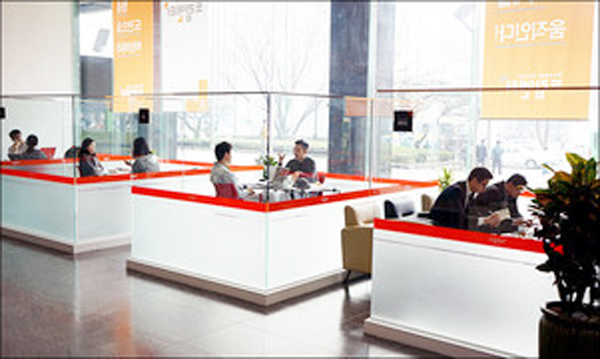 Lately, I have felt conflicted every time I passed by Gwanghwamun Square in downtown Seoul. The hunger strike urging a special law to investigate the sinking of the Sewol ferry continues in front of the statue of Adm. Yi Sun-sin. Rallies supporting or protesting the hunger strike are held in front of the statue of King Sejong. Regardless of what’s right and what’s wrong, continued discord and confrontation make me gloomy.

But a visit to Dream Enter on the first floor of the KT Building changed my bad mood immediately. Dream Enter is a space sponsored by the Ministry of Science, ICT and Future Planning for entrepreneurs to gather and collaborate. The passion of aspiring entrepreneurs and their ideas drove away the stress of Gwanghwamun Square. The four conference rooms were filled with young Koreans in their 20s.

Director Park Yong-ho said that they were preparing start-ups or had just started their own businesses. The first floor is for those who are preparing, while the second floor has office space for start-ups. Workers can stay at the center for up to four months, and many more entrepreneurs are lined up.

Choi In-seok, 25, started his own business in July 2013. After completing his military service, he was supposed to go back to college as a junior, but he decided to postpone his studies.

“I am afraid of failure, but it would be less shocking to fail when I am still young,” he said. “The work is tough but fun.”

Since Dream Enter opened in February, 40,000 aspiring entrepreneurs had visited the center by August. There is a period called the “lost decade” in the Korean IT industry. The Kim Dae-jung administration worked so hard to fan the venture boom, but the following governments under Roh Moo-hyun and Lee Myung-bak put out the embers. As a result, there are not many start-up ventures that need a major push. The Park Geun-hye administration wants to rekindle the flame of the creative economy. But progress has been slow and the phrase “creative economy” is now frowned upon. It is reminiscent of the terms “innovation” and “green growth,” which shaped the administrations of Roh Moo-hyun and Lee Myung-bak.

But it should not end like that. A creative economy is something that Korea should pursue in the future. It doesn’t necessarily have to be packaged that way, but the show must go on. The young, aspiring entrepreneurs are expanding their dreams day and night into every corner of Dream Enter. I left the center around 10 p.m., and I could still hear voices over the microphones. The work hadn’t ended yet.