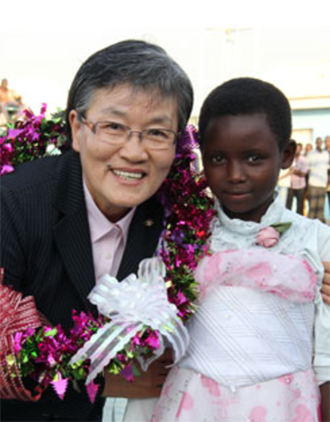 Saenuri Party Rep. Lee Ailisa, a former table tennis player, is a staunch believer that sports diplomacy can raise Korea’s status as an active supporter and friend of other nations.

Lee recently started a sports infrastructure initiative targeting developing countries in Africa and Asia: In collaboration with the Ministry of Culture, Sports and Tourism, she launched a project called Building Small Gyms, which aims to encourage children from developing countries to pursue their dreams through access to adequate multipurpose gyms.

“The JoongAng Ilbo broadened my perspective to see other countries,” said Lee. “I am not just confined to my own country any more.”

She added that she was inspired by a story in the paper about Lim Heung-sae, who coaches Football Act 29 in South Sudan, who sought to spread hope in the African country through sports diplomacy.

Lee has actively supported the sports industry in South Sudan and has been integral in helping the nation become a member of the International Olympic Committee (IOC).

In collaboration with the Sudanese government and sports-related organizations, she also provided financial support to help the nation organize an athletic association and shared her knowledge on how to manage such an agency.

Her efforts led her to be invited to South Sudan in July as a national guest, where she received a plaque in recognition of her efforts from the country’s president.

At the founding ceremony in July of the National Olympic Committee for South Sudan, she handed the IOC flag to the chief of the nation’s Olympic committee.

It is expected that the country will be accepted as a member of the IOC in September.

“The poor sports infrastructure in Sudan reminded me of the old days when I was in the Korean National Training Center back in 1970,” she said.

“At that time, the roof of the building was made of galvanized steel. I had to endure sizzling temperatures in the summer and freezing days in the winter.”

Lee won the gold medal at the 1973 World Table Tennis Championship in Sarajevo, which fixed her status as a recognized athlete. She later functioned as the coach of the national table tennis team before building an extensive career in sports administration.

She has since worked in various roles, notably as the head of the Korea National Training Center in Nowon District, northeastern Seoul, and as a professor at Yong In University in the department of social physical education. She was elected as a Saenuri proportional representative in April 2012.

“I believe South Sudan will become a powerful nation through sports,” the representative said. “Even though Asia and America have invested a huge amount of capital into the Republic of South Sudan, people in the country actually consider Koreans their brothers because South Korea has expressed sincere concern through sports.”