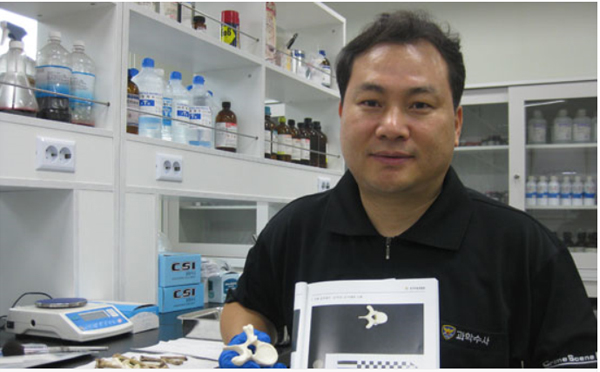 Kim Young-sam, a forensic officer, shows his recently published book, which is the first book in Korean to explain the differences among bones. By Jeon Ick-jin

It’s a little known fact that forensic scientists have trouble distinguishing between human and animal bones.

Kim Young-sam was one such forensic scientist, so he decided to do something about it.

Kim, who works for the Gyeonggi Police Agency, spent two years researching the differences between bones and compiled his findings in a book called “Comparison Illustrations of Human and Animal Bones.”

The Korean book is the first of its kind to describe the differences of each type of human and animal bone.

Kim said the purpose of the book is to provide easy ways of determining bone origins to improve forensic science.

His research wasn’t completely dry, however.

“I ate a lot of pork hocks for two years to figure out the characteristics of the bones in pigs’ feet,” Kim said.

“Some people thought I was pretty weird because I brought all the bones home after eating the pork hocks.”

Kim worked from 2012 to 2013 researching five different kinds of bone sets, including those of dogs, raccoons and pigs.

In the book, Kim uses 200 photos of animal bones, which were provided by the veterinary department of Seoul National University, and describes the characteristics of each bone. For the depiction of their human counterparts, Kim used skeleton patterns made in Germany that closely resemble actual human bones.

After studying clinical pathology at Yonsei University, Kim was employed at the police agency in 2006. He has been in charge of gene and fingerprint investigations.

Even though Kim led the research, his fellow police officers and the Skeleton Investigation Research Association organized by the Gyeonggi Police Agency were crucial for the project.

“I expect people’s trust in police investigations will be raised thanks to the book,” said Choi Dong-hae, chief of the Gyeonggi Police Agency.

“Kim’s research will be a starting point for expanding the police’s criminal investigation methods.”