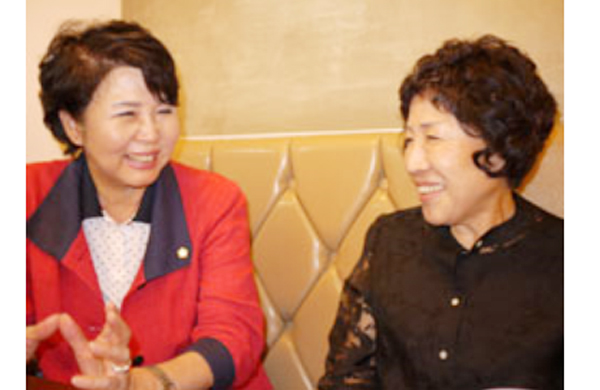 The idea of giving strollers to defectors first began when the members wondered what a defector mom would need most when living in Korea. North Korean defectors often hesitate to buy strollers because they can be expensive, some costing 2 million won to 3 million won (about $1,900 to $2,900) each, and they are used for only a couple of years.

Preparing for the event for about a month, the members put up some 20 banners and distributed about 5,000 leaflets to collect baby products, including secondhand strollers.

Lee Jae-min, 63, a councilmember of Gangnam District, and Kim Gui-ok, 68, president of Jongno Gallery, who spearheaded the drive, said they were glad they could hold such an event. Kim, who has three grandchildren, was passionate enough to visit every household in her apartment complex, getting the participation of 68 families.

“I didn’t even feel tired after I witnessed parents weeping and taking their babies back home in strollers,” she said.

“One mother even donated an expensive stroller she was keeping for her second child.”

For the first donating ceremony on Tuesday, the members of the branch managed to collect 10 strollers, five tricycles and many other baby products such as walkers and toilets, which filled up 12 small trucks, as well as diapers, baby clothes and books for the defector families.

Kang Tae-sun, CEO of the outdoor brand Black Yak and president of the NUAC’s Gangnam Branch, also donated more than 1,000 garments produced by the company.

“We had to pay special attention to not hurt the feelings of the defectors because many of the gifts were secondhand,” said Lee.

The participants washed and sterilized strollers and laundered the secondhand clothes. “We prepared so hard to give nice presents to defector families for the upcoming Chuseok holidays,” Kim added.

They are planning another donating event soon.