Defense minister gets knife, powder in the mail

Defense minister gets knife, powder in the mail 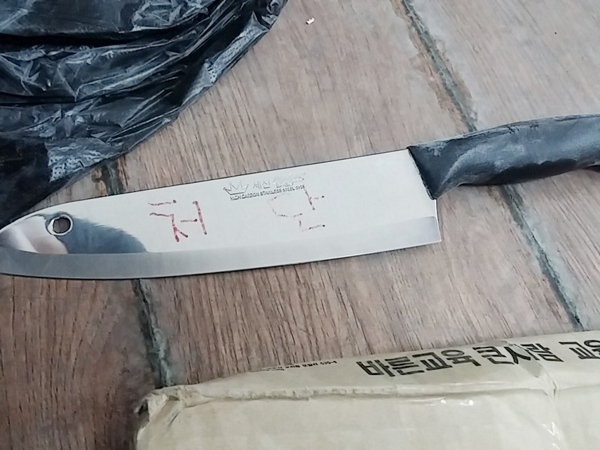 A kitchen knife and the parcel sent to Defense Minister Han Min-koo late last month. The Defense Ministry said yesterday it is working with police in the investigation. [NEWS1]

Just ahead of Chuseok, the Korean harvest festival, Defense Minister Han Min-koo was sent a chilling gift: a kitchen knife in a box that also contained suspicious white powder and a threatening letter.

The parcel sent to Han in late August contained a kitchen knife that measured 12.9 inches from the blade’s tip to the hilt, according to the Ministry of National Defense yesterday.

Scrawled on one side of the blade in red ink was the word “Punish” while “Han Min-koo” was written in wobbly letters on the other side.

This knife was packaged with 20 milligrams of what was later identified as flour.

A two-page letter signed by the “International Peace Action Corps” contained further threats to the minister and his family.

“How dare you wag that tongue of yours to bring about a fiery cloud of nuclear war to the Korean Peninsula?” the letter read.

“I have infiltrated you and your family’s movements and control them in a way you could hardly imagine.”

The writer added, “There is lava boiling in our hearts full of determination to get rid of you and secure the safety of the people.”

The Defense Ministry has not apprehended a suspect but has several leads through an investigation in cooperation with the police.

The box addressed to “Han Min-goo” arrived on Aug. 24 at a post office in Yongsan District, central Seoul, where the ministry is located.

However, because the address was written incorrectly, the parcel was returned to Eunpyeong District, northwestern Seoul, where it was sent from.

The Eunpyeong post office called the phone number written on the parcel, the Defense Ministry’s general service number, and confirmed the accurate address.

The original box was falling apart and when a post office clerk repackaged it, he discovered the knife inside and immediately reported it to the Defense Ministry.

The Defense Ministry formed a joint military and police investigative team to track down the origins of the parcel.

The team confirmed that the parcel was sent from a convenience store in Yeonsinnae, Eunpyeong District, and confiscated its CCTV footage to track down a suspect.

After examining CCTV footage, the ministry said the suspect is a male who appears to be in his mid-20s, around 175 centimeters (5 feet 8 inches) tall, wearing a black T-shirt and cap.

Two fingerprints were found within the parcel, one which was confirmed to be a post office clerk’s, and one still unidentified, according to a ministry official.

It added that it is trying to track down the suspect through CCTV footage in the neighborhood of the convenience store.

The letter threatened to punish Kim if he “dares to provoke the utmost dignity” of North Korea. The ministry called the threatening parcel “an act of terror.”

But a military official said, “The suspect from the April incident appears to be a different individual than this time based on a handwriting analysis.”