‘Faust’ adaptation ahead of its game

‘Faust’ adaptation ahead of its game 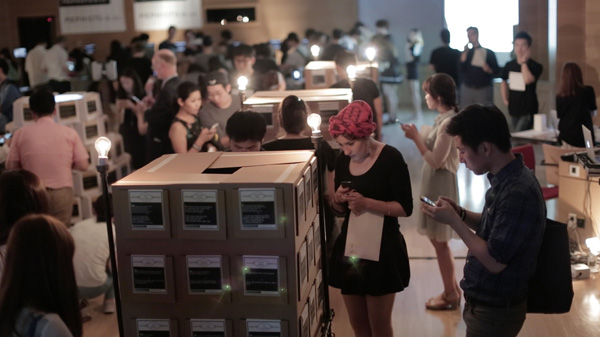 One hundred players gather for the world premiere of “Being Faust - Enter Mephisto,” a classic play turned multiplayer game, on Monday, Sept. 1, at the Seoul Metropolitan Library in Jung District, central Seoul. Provided by Nolgong


How would the devil catch souls in this day and age?

One thing is for sure - he would be advertising his services on Facebook.

In a modern reinterpretation of the German literary classic “Faust” by Johann Wolfgang von Goethe, visitors to the Seoul Metropolitan Library found out on Monday evening whether they would be able to resist the devil’s powers.

The world premiere of “Being Faust - Enter Mephisto” was open to 100 participants who had previously registered for the event online.

Slots were fully booked within a few hours.

In cooperation with the resident Goethe-Institut, the German cultural center, the Korean gaming company Nolgong developed the classic play into a multiplayer game, turning the audience into cast members.

Just like young Faust, players enter into a contract with the devil to fulfill their deepest desires, and it is up to them how much they are willing to sacrifice.

Developer Peter Lee was especially excited about using modern technology as a new cultural technique to experience the universal themes of classic literature.

Dr. Stefan Dreyer, head of the institute, added that Goethe himself “would be in sync with us” since the poet was known to be a forward thinker.

The play will be open to a new round of participants in the third week of September at the National Theater of Korea in central Seoul after having traveled to a gaming convention in Johannesburg, South Africa.

Hong Kong and Tokyo will also be hosting the event in the near future.

According to Dreyer, information about players’ decisions from all these different locations will be archived, making it possible to map different cultural interpretations of basic human values such as family, knowledge, wealth and power.

Lee added that there was emotional value in big data that has not yet been tapped.